We can certainly agree that CZ 75 is a pretty damn sexy pistol. So, what could be even sexier? How about CZ 75 Automatic? The only CZ 75 specifically designed with fully automatic mode.

The idea of making CZ 75 capable of fully automatic fire was born in the head of  Ivo Janeba in the year 1991. At that time CZ didn’t have any submachinegun in 9mm luger so it seemed like a good idea to add at least a fully automatic pistol to the portfolio. 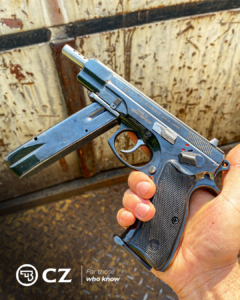 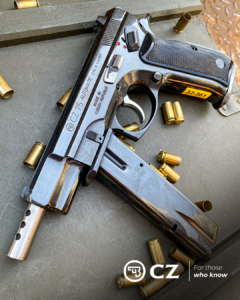 At the early stage of the development, prototypes were made to be able to fire only in a fully automatic regime. After testing in 1991 the second part of the development was launched. This time it was a development of an integrated fire selector in combination with safety. The first couple of prototypes were developed by Stanislav Střižík. It was a simple solution that was tested by firing eight thousand rounds without a single malfunction. The main disadvantage of this system was that it worked only in a single action. His colleagues Koten and Kuba developed at the same time another system that worked in both single and double-action modes.

The pistol weighs approximately one kilo which makes it fairly light and also unstable for shooting fully automatic. Therefore, designers came up with another idea on how to improve the handling of the gun. The bottom of the magazine was made out of metal with grooves and a spring-loaded catch so that it can be easily attached to a rail in front of the trigger guard. This way you could make a front grip out of your spare magazine. This front grip helps significantly to control the gun during the fully automatic fire. A similar front grip can be found also on Beretta 93R, but that is a foldable part of the gun itself. To achieve the best possible stability during the fully automatic fire, another feature was implemented. This time it was a longer perforated barrel (146mm). Six holes placed on the upper part of the barrel sticking out of the slide, are placed in a position of eleven and one o’clock. These holes work as a compensator, guiding the firing gases up, which helps to keep the barrel down during the firing. 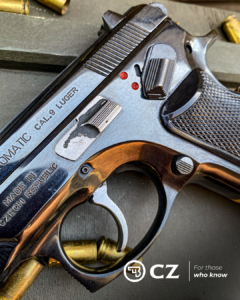 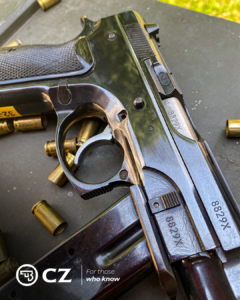 There were different types of magazines made for CZ 75 Automatic. The main difference was in the capacity which was 15 or 16 rounds and also a special one with 25 rounds. Pistols were tested during the year 1992 by the Rapid Response Unit which is a SWAT-like unit of the Police of the Czech Republic. It is under command of the Ministry of the Interior. The result was negative. The uncontrollable muzzle rise during the fully automatic fire was declared as the main reason why it was rejected.

CZ decided to make small series of these pistols anyway. The production started in the year 1995 and continued till 2000. Another batch of pistols was made also between 2002 and 2003 and the last pistols were made in 2007.

In total there were only 2382 CZ 75 Automatic pistols made which is not a lot and it is considered to be a collectible item these days.