For a very long time, Česká Zbrojovka has been known, among other products, for its excellent hammer-fired pistols.  Countless shooters love the CZ 75 for its awesome trigger, low recoil, and last but not least, its beautiful design.

When the CZ P-10C pistol was initially introduced, many people considered it to be CZ‘s first attempt to enter the „polymer nine striker-fired“ battlefield. However, that couldn’t be further from the truth.

Back in the early ’90s, Česká Zbrojovka decided to develop a brand new pistol design that would focus on the growing popularity of polymer-framed pistols, featuring a double-action trigger system. The new gun was supposed to be affordable, simple, and reliable – exactly what you expect from a self-defense weapon.  It was decided that the weight of the gun must be 700g or less and be featured in a compact form factor.

The CZ design team was led by Ing. Václav Polanský who went ahead and used a polymer frame, at that time it was still considered rather innovative and not a very common design feature. Although we perceive this technology as a standard today, it was not easy to set up a production line for polymer frames in early 1990’s Czechoslovakia and thus, the first prototype was made out of an aluminum alloy. Ing. Polanský designed the pistol with the help of Vojtěch Anderle, an academic sculptor, thanks to which the CZ 100 boasted a modern design. 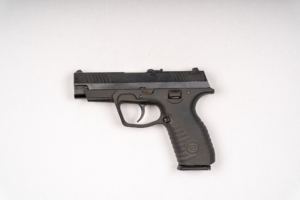 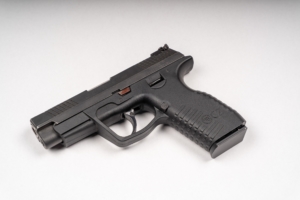 To the untrained eye, this is just another Browning style locked-breech gun with a locking surface on the edge of the chamber block. But there is more to this pistol than it may seem.

Let’s have a closer look at the frame. As previously mentioned it was made using a polymer, but it employed several design features that are rather uncommon for polymer-framed guns these days. Most notably was that the frame was not fiberglass reinforced. The material of the frame was firm enough, enabling the slide to travel directly inside the polymer grooves of the frame without the need for steel inserts. Now you may be wondering – how durable was this design. Testing proved that after 15,000 rounds there was no excessive wear on the frame rails. The benefit, apart from a cost-efficient production, was also the possibility to increase the length of the rails, and thus maximizing contact points between the frame and the slide. 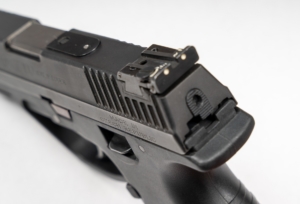 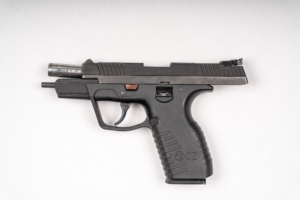 You may also notice a well-pronounced slide release that is oriented further back compared to the CZ 75 for example. The slide release is recessed inside the frame which is beveled on top.

It is easily accessible even for people with smaller hands but it may interfere slightly with your grip if you have larger hands.

Further upfront you can find a disassembly cross pin that works exactly as you would expect from a cross pin on Browning tilting barrel guns, nothing very interesting there.

On the lower part of the frame towards the muzzle end, the CZ 100 is equipped with a proprietary accessory rail for a flashlight or laser. Once again – not a very common feature back in the day. 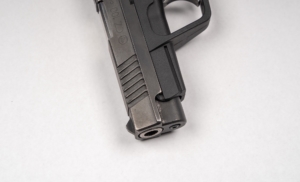 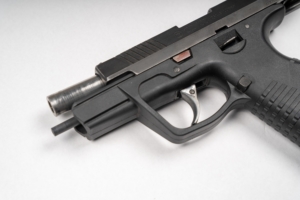 The magazine came in a double stack single feed configuration, with a 13 round capacity for the 9x19mm version and a 10 round capacity in .40 S&W. These magazines are not interchangeable with other CZ mags.

One last thing to talk about regarding the frame is the trigger system hidden inside. It is a pure DAO mechanism with a long and rather heavy pull. That, on one hand, is detrimental to accuracy, on the other hand, it is a safety feature and this gun was meant to be carried loaded with a round in the chamber ready for immediate use.

As always, CZ had you covered if you didn‘t like the DAO trigger. The CZ110 was a slightly tweaked version featuring a SA/DA trigger with a decocker button on top of the beavertail. How cool is that?

Let’s now move up top as you can find some interesting features there as well.

The slide was produced using modern CNC milling machines. This technology was also rather new for CZ and therefore it took a lot of time and effort to handle it properly. An interesting element of the CZ 100 frame is the steel T-shaped part above the ejection port. This protrusion was supposed to help with one-handed loading of the gun, and it would have been achieved by catching the protrusion against your belt or any edged hard surface. This feature, which is today presented by some other manufacturers as a „hot Innovation“ (typically integrated into the rear sights) was an ordinary feature of the CZ100 back in the early 1990’s just like the front serrations which are also popular nowadays especially with those performing press checks. 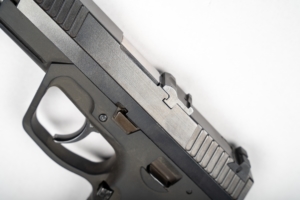 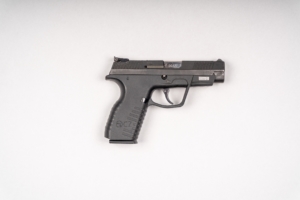 All put together the gun sits nicely in your hands, however, the grip texture is certainly no match for the currently available pistols.

Despite all these modern features the CZ 100 did not achieve the level of popularity that was expected from it. It was supposed to be an affordable self-defense weapon –  colloquially it was called „postman’s nine“ or „taxi driver’s nine“ – but the customers still preferred the heavier and more traditional CZ 75 despite its higher price.

After its designer, Ing. Václav Polanský left Česká Zbrojovka the development of the CZ 100 was handed over to Ing. Radek Hauerland and Ing. Ivan Filko. Radek later worked on several other CZs including the first subcompact – the CZ 2075 RAMI and Ivan Filko is responsible for – well, guess what – the CZ P10C.

So there you have it, the story of the first polymer striker-fired nine-millimeter from Česká Zbrojovka.