If there is a specific common feature of the Czechoslovak firearm’s design in general it certainly is, and always has been ingenuity. One of the interesting examples of this statement is a submachine gun known as ČZ 247. Let’s have a look. 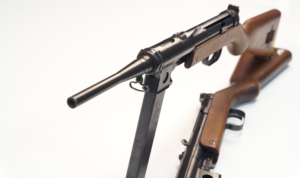 Back in early 1946 Czechoslovak authorities decided it was necessary to introduce a brand new submachine gun to its freshly reorganized armed forces. One of the requirements was to make the weapon easy to shoot from various positions.

Česká Zbrojovka a.s. located in the town of Strakonice was at that time one of the two major firearms producers in the country. Along with their colleagues from Zbrojovka Brno, their design team started to work on their contributions to the trials.

The simplest way was to take a pre-war Vz. 38 submachine gun, which was introduced very shortly before the beginning of the Nazi occupation, and see if there is any way how to adapt this gun to meet the requirements.

Since the original weapon was chambered in 9mm vz. 22 cartridge, which was slightly more powerful .380 ACP it was necessary to rechamber the weapon. These were called ČZ 47/I and were presented with both stick magazines and 80-round drum magazines. It is necessary to say that these were not bringing anything new to the trials.
The person who changed this was Jaroslav Holeček, a young member of the ČZ’s design team responsible for the later major innovations in the submachine gun designs. He was influenced by the construction of the British Sten Gun which had an opportunity to rotate the magazine well 90 degrees thus closing the ejection port preventing dirt from getting into the internals of the firearm. He realized that this feature may be even extended allowing the shooter to shoot from the horizontal or vertical position of the magazine.

A new design with this clever feature was introduced as ČZ 47/II later renamed to ČZ 247. 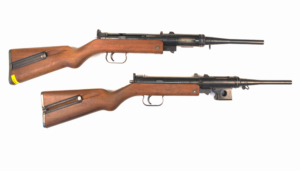 As the photos show it was a simple blowback open bolt submachine gun with a tubular receiver and a wooden stock. If the weapon looks rather compact to you compared to similar guns like PPSh 41 or Finnish Suomi M31, you are right! It is also very light weighing only 2,9 Kg (4lb 10oz) unloaded. 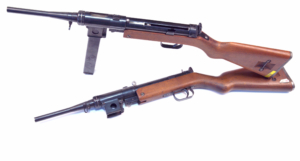 The trigger mechanism is quite simple and similar to Jaroslav Holeček’s later design – ČZ 148. This weapon also featured a progressive trigger with no manual fire mode selector. Simply pull the trigger slightly and get one shot, pull further and you get a burst. This solution has never been used on any larger scale perhaps except the Austrian Steyr AUG assault rifle.

The bolt carries another feature known from Jaroslav Holeček’s later designs – the spring-loaded charging handle which blocks the movement of the bolt when not cocked and thus prevents any unintentional discharge when the gun is dropped etc. 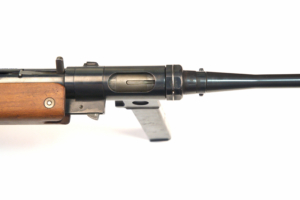 The sights are very simple and easy to use. The rear sight has two plates that can be used for 100m and 300m distance. The front sight is a simple blade and it sits on a collar that is fixed to the stock. That brings us to the receiver itself. 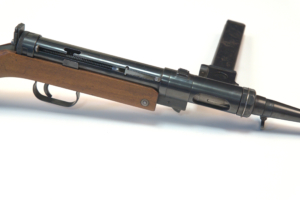 Thanks to its tubular shape the whole assembly can rotate 90 degrees being held by the above-mentioned collar and part of the spring guide rod protruding through a fixed plate that carries also the rear sight.
Turning the receiver itself is very simple, just push the button on the bottom of the collar and you can change the position of the magazine along with the charging handle and the ejection port. 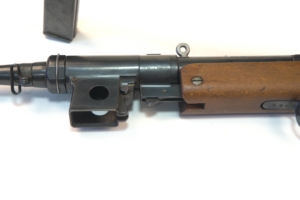 Speaking of the magazine itself, it holds 40 rounds in the case of the box version. The drum magazine was omitted from the later versions of ČZ 247 as it would be impractical for a horizontal shooting position. 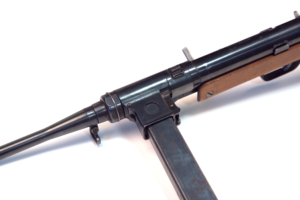 Another typical feature for the Czechoslovak submachine guns of the 1950s is the magazine loader that is present on the right side of the stock. 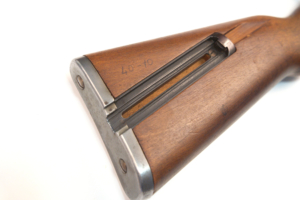 The disassembly is quite simple. Just push the lever in the rear part of the receiver cut out forward. That unlocks the whole receiver that can now pivot. Then remove the end cap by rotating it approx. 45 degrees and you can remove the guide rod, the recoil spring, and the bolt itself.
Reassembly requires a bit of patience because the recoil spring is not captive and therefore it needs to be compressed so that you can correctly insert the guide rod and close the end cap. 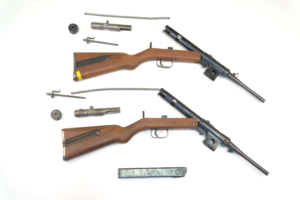 As the military officials requested a version in 7,62mm Tokarev cartridge for comparison the design team reworked ČZ 247 to a soviet chambering calling it ČZ 347. It later turned out that 9mm is far superior to the Russian caliber in pretty much any way and thus a majority of the submachine guns were produced in 9mm Luger. 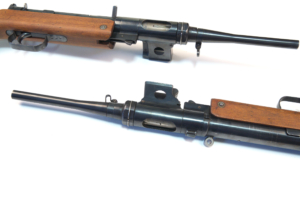 The turning point in the trials occurred when Jaroslav Holeček, the very same author of the rotating receiver of ČZ 247 came up with the idea of a so-called telescoping bolt via his prototype H/p. That immediately caught the attention of the military commission and all future prototypes were requested to be based on the same concept.
That was the end of ČZ 247 in the trials. However, Česká Zbrojovka received permission to export the submachineguns. 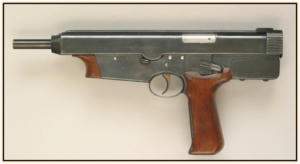 The major customer requesting 10 500 pieces incl. ammo was Egypt. At the same time, it was decided to hand over the production to ČZ’s branch in Uherský Brod, today’s CZ factory. However, cooperation with Egypt was in the end deemed indefensible given the tense situation in the area of the Near East and was canceled.

In 1950 a batch of 250 pieces was sent to Bolivian police. Later in the 1960s, another shipment was sent to Nigeria and the Republic of Biafra.
A considerable amount of submachine guns was also used by the Czechoslovak People’s Militia.

In the end, therefore, this interesting, and to some extent, innovative weapon has seen very little use. That, indeed, makes it no less interesting for any firearms history aficionados.