So you thought water guns are just toys for kids right? Let us prove you wrong.

CZ has always been known for innovations in the firearms industry and their prototype water cannon known as Tarantule is no exception. What does it do? 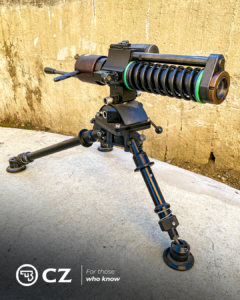 You most probably ever heard of a water jet being used to cut various types of materials including wood, rubber but it can also slice stone or metal like a hot knife through butter. That is how powerful water can be under extreme pressure.  In the early 1990s, CZ designers decided to use this feature for a completely different purpose.

It was a reaction to the fast-growing crime rate and international terrorism not only in the Czech Republic. Imagine you want to open a locked door or a vault without damaging what is behind it. Using explosives may be too risky but what about an extremely fast jet of water? Well, that might just work… 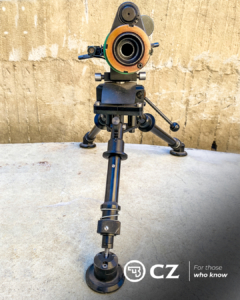 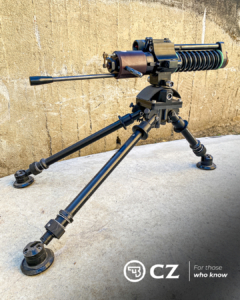 Tarantule is described as a water cannon used to punch through various locks, walls, and other obstacles. The most interesting ability however would be defusing planted bombs. Wait, what? How? Well, let’s elaborate…

This space-age-looking device weighs 20kg ( or 44 lb ) and features a smoothbore barrel with a diameter of 18mm and 410 mm in length. 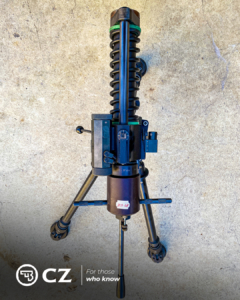 It is placed on a heavy tripod as the firing distance is very low– 3 to 5 meters maximum. The recoil is mitigated by an extremely heavy spring that is wrapped around the weapon.

The bolt is screwed to the end of the breech and features two handles that allow the shooter to properly aim the weapon. There are no fixed sights but the cannon uses a pair of lasers or alternatively optical sights instead. The propellant is then a fuse which is actually just a slightly modified blank .50 caliber round. 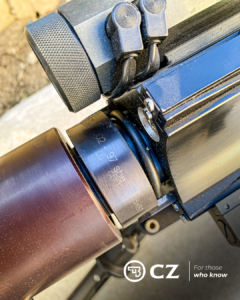 Once the bolt is locked you may proceed with the „projectile“ which is 70ml of pure water loaded in the same manner as muzzleloader rifles used to be. Raise the muzzle end up, pour water down the barrel, and seal it up properly with a special plug.

Then aim the gun, lock the tripod, connect two wires to the end of the bolt and take cover. 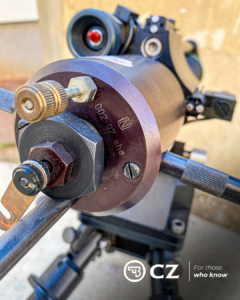 The cannon is fired remotely to protect the operator from any fragments of the destroyed target material.

Being electrically ignited the fuse creates a tremendous amount of pressure which is used to „shoot“ a short jet of water against the target.

But how does it defuse a planted bomb? The trick is in the projectile and muzzle velocity. The patented pressure system keeps the water together so it leaves the barrel as a „solid“ jet at the speed of up to 3500 m/s or 11.483 fps. Such a powerful impact destroys anything in its way but at the same time is „shattered“ into small harmless droplets. This feature is important for the safe defusing of bombs as there are no sparks at the moment of impact. The water jet scatters the fuse system of the bomb into pieces before the electrical impulse can detonate it. Tarantule was successfully tested to neutralize a planted Semtex bomb, a plastic explosive similar to C4. 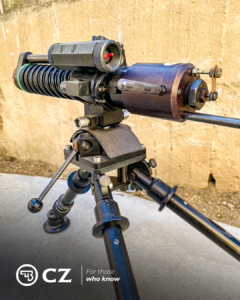 Apart from water Tarantule was also able to shoot other types of projectiles for different purposes making it a universal and easy-to-use tool for a variety of users.

Unfortunately, the weapon never managed to find its customers, and, in the end, only 6 prototypes were ever made. It probably became a victim of being way too progressive as it often happens with such products.