If I asked you to name the perfect example of a military rifle I am sure the answer would be either an AK -47 or AR-15. These are, no doubt, the two most iconic assault rifles ever made and they both have a large fan base. But then there are those „hipsters“ of the rifle community who love the good old Czechoslovak Vz. 58. If you are one of them you will, most certainly, like the following story.

Prior to World War 2, Czechoslovakia was one of the global leaders in firearms manufacturing, but after the war, it ended up in the so-called Eastern Bloc. Losing their previous independence, it seemed that the renowned Czechoslovak firearms design may be forced to swallow the bitter pill and start producing Russian small arms like Tokarev pistols or SKS rifles. Luckily, the DOD hastily adopted several domestic designs that warded this threat off. One of them was a Vz. 52 rifle that became a standard infantry rifle of the Czechoslovak army in 1952. Soon, however, it turned out it was not only a bit outdated but also suffered from several design-related issues. It was, therefore, decided to seek a replacement.

The idea was to utilize the original Czechoslovak 7,62×45 mm cartridge which was a bit more powerful than the standard Soviet 7,62×39 mm. It was used in the above-mentioned Vz. 52 rifles and worked really well. Several designs were submitted, at that time marked as „heavy submachinegun“ rather than an assault rifle. Famous Koucký brothers came with their ZK-503, and the father of the ZB 26 machine gun Václav Holek presented his ZB 530. The youngest designer, Jiří Čermák, an employee of the ČZ Strakonice factory submitted two samples – ČZ 515 and ČZ 522. 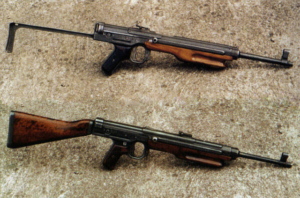 In 1955, however, the situation changed rapidly with the establishment of the so-called Warsaw Pact. That was the end of the 7,62×45 mm cartridge. The Soviet authorities strictly insisted on using their standard 7,62×39 mm ammo. Czechoslovaks were, therefore, briefly considering setting up a production of Soviet rifles, AK-47s this time.

Once again, this proposal was rejected and new requirements were determined. The rifle was supposed to be no heavier than 2,7 kg without a magazine with a maximum length of 850 mm in both versions – with fixed and folding stock.

The development took place in the city of Brno in the state-owned research institute „Konstrukta“ and received the code name „Koště“ (broom).

The chief designer Jiří Čermák and his team started working in early 1956. Soon enough it turned out the biggest problem would be the weight limit. Therefore the team came up with a unique „hinged“ locking system that may remind you of Walther P-38 pistols. It was not only simple, and lightweight but also provided a very solid lock which increased accuracy. The new design using a short-stroke gas piston combined with a unique striker-fired system, and a rather compact size was prepared for testing in the Soviet Union by autumn of 1956.  The rifle passed all the tests and was deemed comparable with the AK-47 in all aspects. The Soviets were particularly surprised by its accuracy.

Apart from the original locking system, the rifle offered a few other design elements that were certainly not common at the end of the 1950s. The 30-round magazine was made from aluminum alloy thus very light, sturdy, and impervious to rust. When inserted into the rifle it can be fed with stripper clips using a cutout in the bolt. For this purpose, the rifle also locks open on an empty magazine, unlike its Soviet „chubby“ brother. 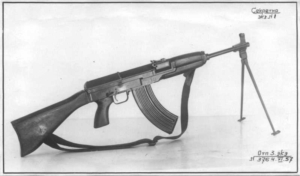 After some minor improvements, the rifle was introduced in the service of the Czechoslovak army as a „7,62mm Samopal vzor 58“ – in English – „7,62mm submachine gun model 58“ sometimes called Vz. 58 or Sa 58.

You may be wondering why „submachinegun“ and not an assault rifle. That is a subject of wild debates even today. It is possible Czechoslovaks only took over the Russian naming convention – AK, after all, stands for Avtomat Kalashnikova. Another theory claims that the term „assault rifle“ was first used by the Nazis giving it a negative connotation, especially in the Eastern bloc. Who knows?

Apart from the fixed stock version marked as „P“ – pěchotní (infantry) and folding stock version „V“ – výsadkový (paratrooper) a third version – Sa 58 Pi was developed. Featuring an NV system, a flash hider, and a bipod it was produced in rather limited numbers and is a true collector’s item today. 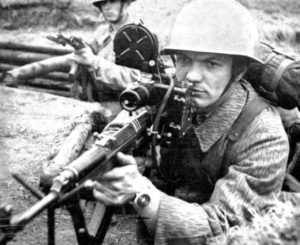 The production started in the CZ factory in Uherský Brod in 1959 and before being ceased in 1984 the production reached 919 650 rifles.

Even though Konstrukta worked on various improvements including a 7,62×51 mm NATO version called AP-67 only the three existing versions mentioned above were ever mass produced. 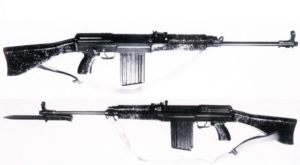 Today Vz. 58 is still a standard rifle of the Slovak Army while Czechs tend to use it for training and certainly keep it as a reserve since it was replaced by CZ 805 BREN and CZ BREN 2.

It served the Czechoslovak army as well as other „com-bloc friendlies“ extremely well and is becoming a valuable item for collectors, especially in its first variant with beech wood parts. 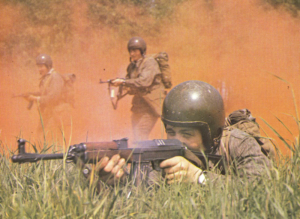 So if you ever hear somebody talking about Vz. 58 being a „Czech Kalash“ you can certainly send them this article.