CZ bolt action .22 rifles are very well known for their accuracy, simplicity, and durability. But what about the handguns chambered in this popular plinking caliber? You may be surprised that the very first dedicated .22 LR pistol from CZ was only developed in the 1990s and, unfortunately, failed to catch on. Let’s have a closer look. 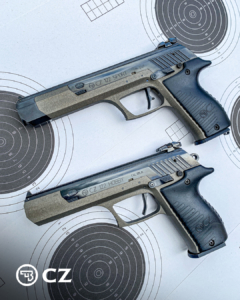 The first prototype of a semiauto .22 LR handgun was, surprisingly, not created by the CZ’s design team but by an employee of the production division Stanislav Buráň. He intended to build a simple, affordable pistol that would be ideal for training and plinking and it resulted in the CZ 94 which was introduced at the 1994 IWA show in Nürnberg.

The CZ management, however, raised a few objections and Stanislav Buráň decided to rework the handgun significantly. The result was a group of three models called CZ 122. The family included a compact model aiming at markets with caliber restrictions for self-defense, a hobby model for plinking, and finally a target model with LPA-style sights, and an adjustable trigger. 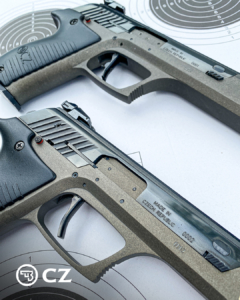 Looking at CZ 122 from a visual perspective, it may remind you of another CZ product from the same period, and we already discussed it on the blog. Yes, correct, CZ 100/110. The reason behind this similarity in appearance is a sculptor and industrial designer Vojtěch Andrle who cooperated on both these handguns. 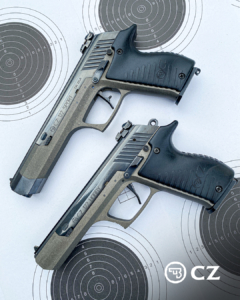 Now let’s have a look at CZ 122 from a technical point of view. The prototypes were tested with both polymer and alloy frames and surprisingly the polymer version turned out to be more reliable. In the end, however, CZ decided to stick to a more traditional aluminum alloy frame. Being a simple blowback handgun CZ 122 features a 122mm long fixed barrel and a steel slide that travels against a pair of recoil springs located underneath the barrel. An interesting feature is to be found on top of the weapon. The upper surface is not a part of the slide which travels „inside“ and this rib is therefore ideal for mounting a red dot sight since it will not impact the weight of the slide resulting in reliability issues. 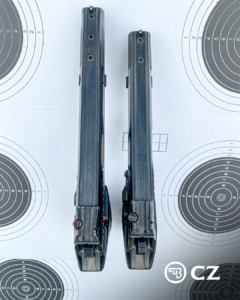 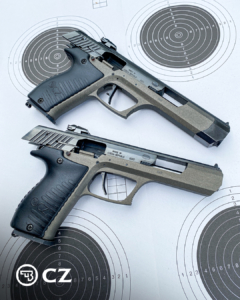 The Sport version, which is the only one that made it to serial production, also includes a steel weight at the end of the muzzle which helps to balance the gun perfectly. The total mass was thus increased to 875 grams. 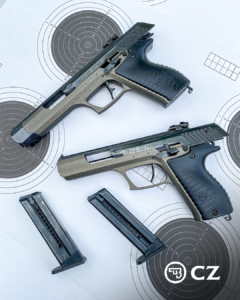 The flat face single action trigger can be adjusted for overtravel and to make it as light and smooth as possible, the gun does not feature a firing pin safety.

The slide release lever is rather conventional, unlike the other two controls. The manual safety is present in the form of a push-through button which is a rather obsolete solution just like the magazine release located on the heel of the grip. The magazine release was very soon replaced with a more ordinary button on the side of the grip and so was the magazine itself, unfortunately. In the beginning, the intention was to use a CZ 75 Kadet magazine but it turned out to be problematic and CZ 122 received a dedicated 10-round magazine. 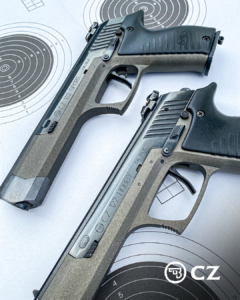 Even though the gun proved to be very accurate, 25mm at 25m with quality ammo is a decent result the reliability issues were never fully resolved. It was, most probably, the reason why CZ 122 never achieved any substantial success.

Between 1998 and 2006 only 6192 CZ 122 handguns were made which makes them an interesting collector’s item for all those who are interested in CZ production. 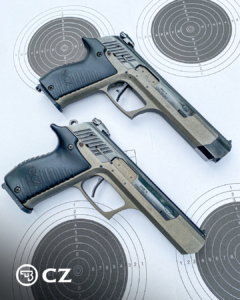