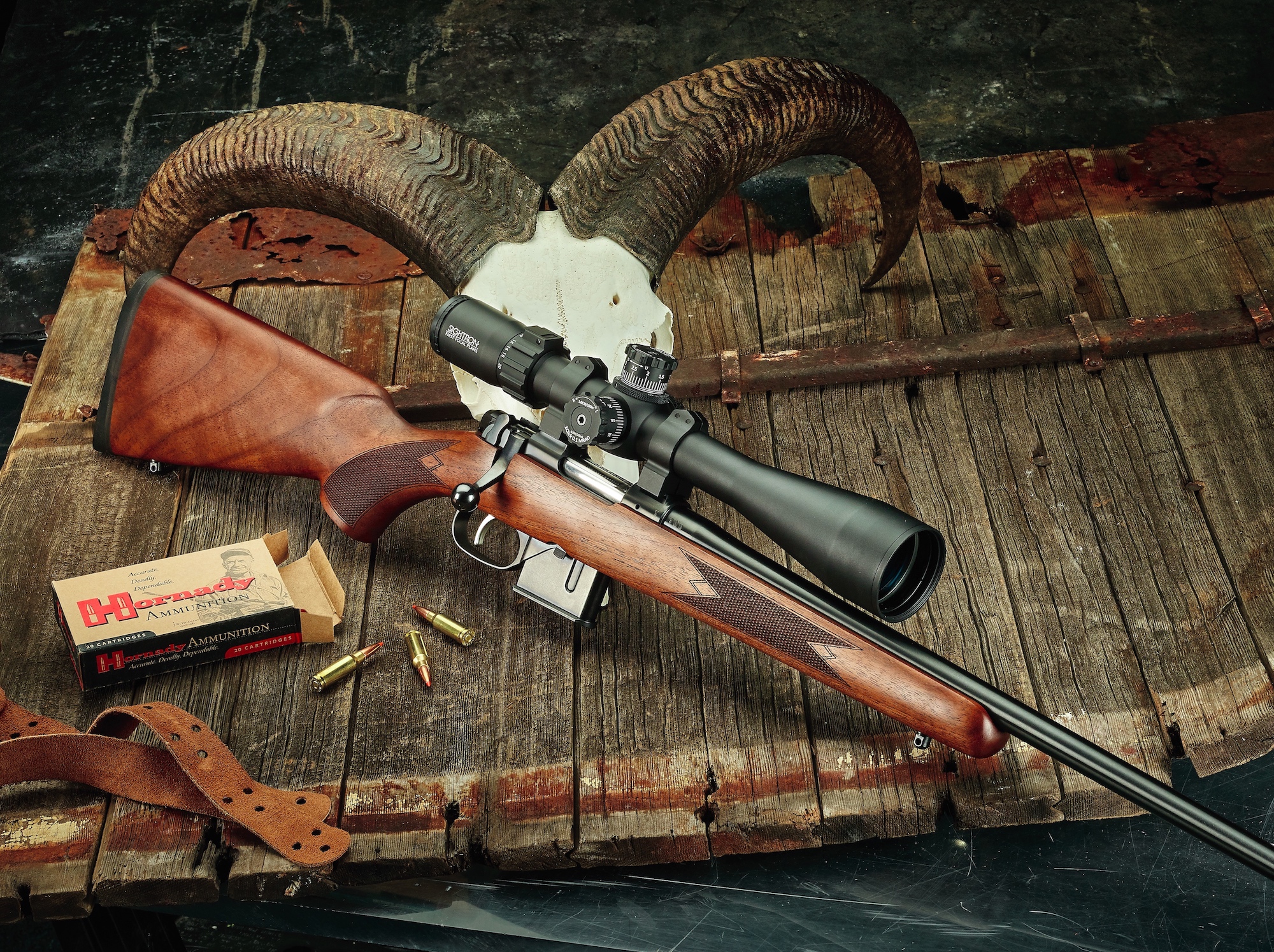 While most of  CZ-USA’S firearms are imported from either the Czech Republic or Turkey, the company strives to make firearms specifically tailored for the American market. Handguns, shotguns and rifles from plain to fancy and in all price ranges provide something for just about any shooter, and their inherent quality and value are well known.

The CZ-USA Model 527 American is now being chambered for the 6.5 Grendel cartridge. The rifle comes with a 24-inch barrel, a Turkish walnut stock, a detachable magazine and a single-set trigger. 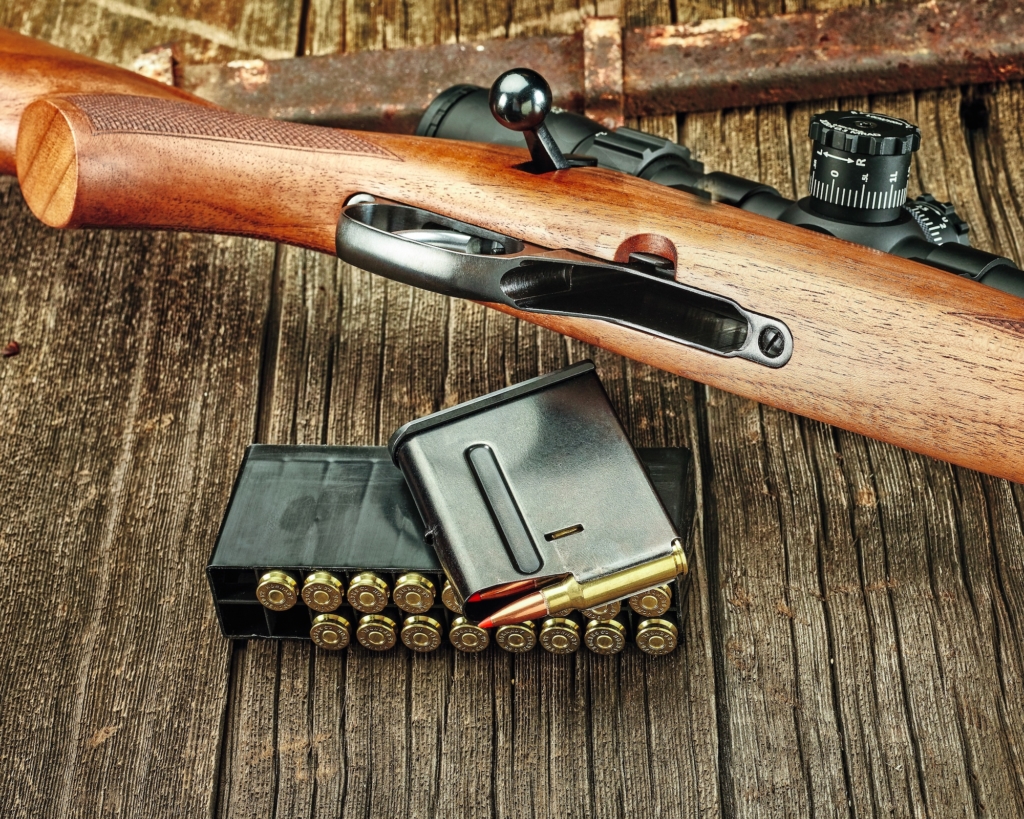 CZ’s centerfire rifle lines cover all the bases, from ground squirrels to elephants, but my favorite CZ bolt gun is the Model 527 American. The Model 527 American is chambered for many popular varmint cartridges, including .17 Hornet, .22 Hornet and .204 Ruger. And if you have a lot of 7.62×39 ammo handy, there’s a Model 527 made for it, too. The newest chambering for the Model 527 American is the 6.5 Grendel. It’s a terrific cartridge that hits way above its weight class and is at home in the game fields. The 6.5 Grendel was developed in 2002 by Bill Alexander, who once told me that the little 6.5mm cartridge “was specifically designed for hunting.”I may have had a small part in the addition of this cartridge to CZ’s Model 527 chamberings. I am a fan of the 6.5 Grendel cartridge, and in previous conversations with Zach Hein, CZ-USA’s Marketing Communications Manager, I lobbied pretty hard for the Grendel. He quizzed me about the cartridge, including the appropriate barrel length for it. I replied that for optimal performance, the barrel should be at least 22 inches in length, with 24 inches being better. Well, I am pleased to report that the new Model 527 Grendel has a trim 24-inch barrel (actual length is 60cm). The barrel is hammer-forged and hand- lapped. I took a peek at my review sample’s bore with my Hawkeye borescope before putting any rounds through it, and it was smooth and free of extraneous tool marks. Alexander’s 6.5 Grendel is not another “neck it down and blow it out” cartridge development. It is universally recognized as one of the most efficient and thoughtfully designed cartridges in existence. The basis of the Grendel’s case is the 7.62×39, which is also the parent case of the ultra-accurate .22 PPC and 6mm PPC. The PPC case was modified slightly for the 6.5 Grendel (which has a bit more body taper and a 30-degree shoulder), and the neck was thickened a bit to withstand the rigors of an AR-15 semiautomatic action. After much experimentation, the case shape and internal volume were optimized to deliver sleek 6.5mm bullets at decent velocities with pinpoint accuracy.

The Model 527 is CZ’s smallest bolt action and has been called a “mini-Mauser” or a “micro centerfire.” That it is. The receiver is a mere 6.75 inches in length, and the receiver ring measures 1.21 inches in diameter. A .75-inch recoil lug is located on the bottom of the receiver ring, and there is quite a bit of clearance in front of the magazine well. The two-lug bolt is .587 inch in diameter, with the typical Mauser rotating extractor on the right side. The left lug has a slot for the ejector at the left rear of the action.The removable box magazine is marked for both 7.62×39 and 6.5 Grendel cartridges, and it holds five rounds. However, it is pretty tough to strip a cartridge off a full magazine, and I found it to work considerably better with only four cartridges in the magazine. Although the Model 527 has a Mauser-style rotating extractor, the owner’s manual says inserting cartridges into the chamber without using the magazine is also possible. The spring-loaded magazine release is on the right side of the magazine, and it works fine, but it comes out if you remove the triggerguard. Because the 6.5 Grendel was designed for AR-15s, its maximum cartridge overall length (COL) is set at 2.26 inches. However, the Model 527 magazine’s internal length is about 2.375 inches, so longer COLs are possible with some of the longer bullets. Right out of the box, this new Model 527 American is a real looker. It is built in the Czech Republic, as are CZ’s larger bolt-action rifles. It comes with a nicely figured Turkish walnut stock with plenty of well-done cut checkering on the forend and pistol grip. The stock is straight, with very little drop at the comb, as it is designed for scopes. The wood has a smooth semi-satin oil finish. Sling-swivel studs are installed, and the little rifle has a half-inch rubber recoil pad, although the 6.5 Grendel generates just a whisper of kick. The barrel and action are finished in a semi-matte blue. There are no open sights, but the receiver has 16mm dovetails for CZ’s proprietary rings. Customers need to be aware that the Model 527 no longer comes from the factory with a set of CZ scope rings included. They must be ordered separately. As noted previously, barrel length is a nominal 24 inches, and it has the standard Grendel rifling twist rate of one turn in 8 inches. The barrel is free-floated, and the gap is very uniform throughout its length. I find that to be a welcome departure from some of the ghastly bedding jobs I’ve seen on some other brands of rifles. The two-position safety is positioned at the right rear of the receiver. Its operation is back-wards to most American-made guns. Forward is “On,” and this also locks the bolt. Pulling the safety to the rear is “Off.”The Model 527 American’s single-set trigger may be new to some shooters, but once you get used to it, I think you’ll like it. Unset, the pull weight on my test gun is 3 pounds, 13.6 ounces, and it can be adjusted by the user for weight, creep and overtravel. To set it, just push the trigger forward until it “clicks.” The pull weight is then a mere 1 pound, 10.2 ounces. The pull weight of the set trigger can also be adjusted via a tiny screw in the front of the trigger proper, but you have to remove the stock to access it. All of this is detailed in the owner’s manual. I used both trigger positions in my test shooting, and trigger movement was minimal in either position.

For testing the Model 527 American, I mounted a Sightron S-TAC 4-20x50mm scope in Warne 30mm rings specifically made for the Model 527. This feature-packed scope has side-focus parallax adjustment and an illuminated mil reticle that is located in the first focal plane. The positive click adjustments are .1 mil, which translates to .36 inch at 100 yards. I admit this great scope is a little big for the petite Model 527 American, but it sure was a delight to use on the shooting range. The increasing popularity of the 6.5 Grendel cartridge has encouraged several ammunition makers to offer a good variety of varmint, big-game and plinking loads. Alexander Arms has four factory loads, including a 100-grain HPBT as well as 120-, 129- and 130-grain hunting loads. In addition, Hornady offers two loads. The Custom line has the 123-grain SST bullet for big game. I have shot exactly one head of big game with this load, but it was a 236-pound aoudad ram. It was one shot, down and out. Hornady’s new Black ammo (designed for AR-15s) features a 123-grain ELD Match bullet with the Heat Shield tip that resists aerodynamic heating. Federal loads a 120-grain Fusion bullet that is specifically built for deer hunting. And for plinkers, Wolf Gold has a load with a 120-grain jacketed bullet that I’ve seen for sale for as low as $6 a box. I fired each of those factory loads in my Model 527 American, and I also put several of my favorite 6.5 Grendel handloads through the handy rifle. I think the Grendel is a pure plea-sure to handload, as it is very efficient and very accurate with just about any load combination. By the way, it uses small rifle primers. 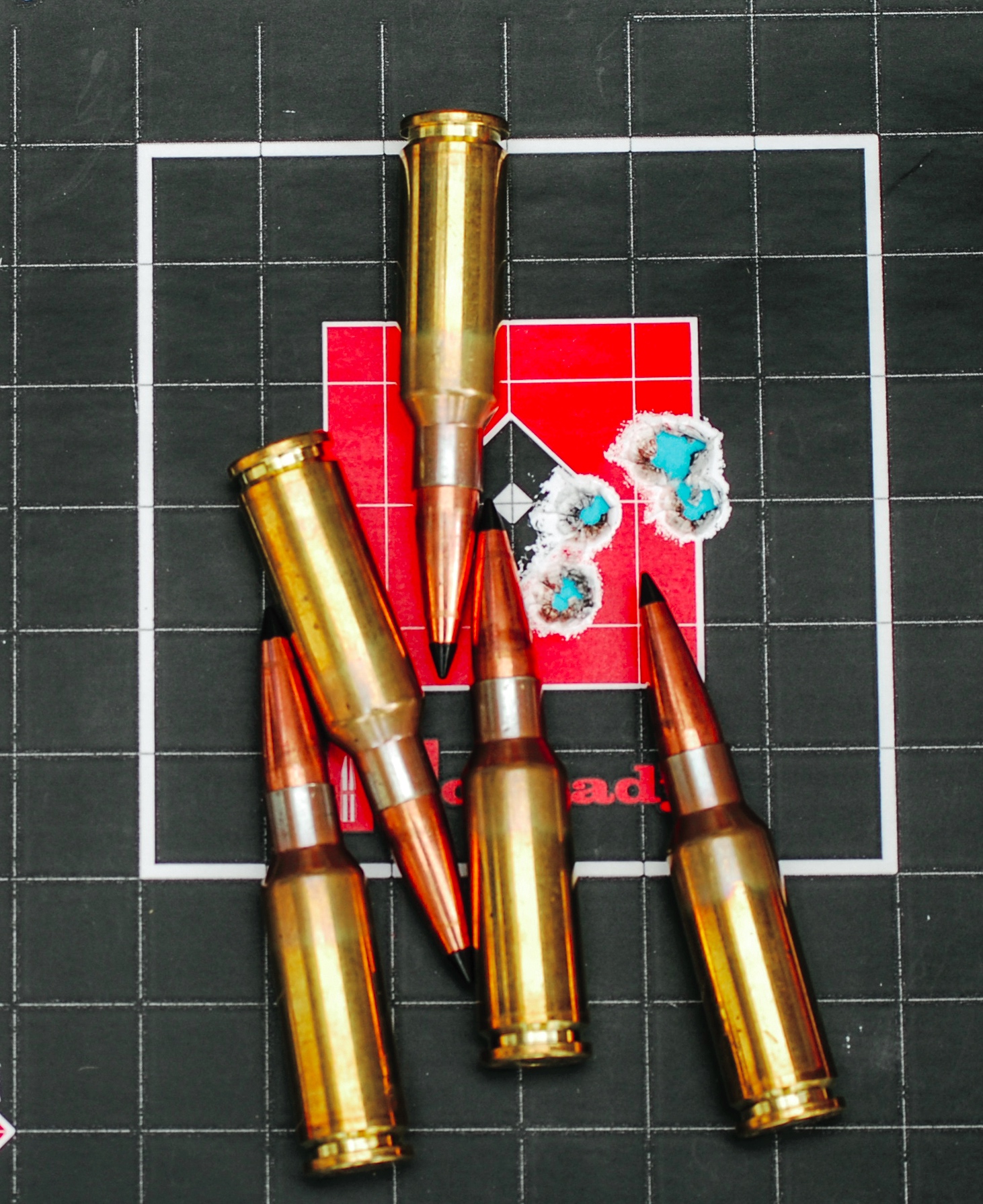 I have tried literally dozens of different hand-loads in several 6.5 Grendel rifles, and the fact is there are almost no “bad” loads; some are just better than others. The handloads in the accompanying chart are just a few of my favorites. The overall group average of all factory ammo and handloads from the Model 527 was .77 inch. The factory loads averaged .94 inch. Best of the factory ammo in this rifle was the Alexander Arms’ load with the Barnes 120-grain TSX bullet. It averaged 2,470 feet per second (fps) for velocity and a tight .55 inch for accuracy. The Alexander Arms load with the Swift 130-grain Scirocco bullet also did extremely well, going 2,382 fps and grouping .83 inch. Both loads would be great for big game. Hornady’s new Black load with the ELD Match bullet chronographed 2,493 fps and averaged .75 inch. The 18 handloads averaged .69 inch. The highest velocity was with the Sierra 85-grain Hollow Point Varminter and a charge of 30.5 grains of H335. It averaged 2,861 fps and grouped under .5 inch. One of my favorite powders for just about any small case is Hodgdon’s CFE 223, and the burn rate is about perfect for the 6.5 Grendel. An excellent varmint load is the Sierra 100-grain HP over 31 grains of this spherical powder. Velocity was 2,549 fps, and groups averaged .69 inch from the Model 527 American. Berger’s 130-grain Hybrid Tactical HPBT shot super with VihtaVuori N135, N140 and N540, although the velocities were a mite low. Obviously, more experimentation with this bullet is warranted. As an informal experiment, I shot groups with both the standard and set triggers and com-pared the results. The overall group average with the standard trigger was .74 inch, while the set trigger bested that by about 11 percent at .66 inch. The CZ-USA Model 527 in 6.5 Grendel can perform double-duty as a varmint and a big-game rifle quite handily. With the Sierra 100-grain HP, a velocity of over 2,700 fps is possible, although speed drops off rapidly. The Hornady 123-grain SST started at 2,488 fps and had a similar trajectory, but the retained energy at 400 yards (966 foot-pounds) is 74 percent higher than with the 100-grain bullet. A 75-grain bullet from the .223 Remington at 2,700 fps has about half of the 6.5 Grendel’s energy with a 123-grain bullet, although the .223’s trajectory is a bit flatter. The compact CZ-USA Model 527 bolt action’s scaled-down size is somewhat unique in the rifle world, and this version styled for Americans should entice shooters on this side of the pond to give it a serious look. There is a lot of interest these days in the well-demonstrated virtues of 6.5mm rifle cartridges, and I am pleased to see the little 6.5 Grendel cartridge getting its fair share of attention. It’s a real game-getter. • 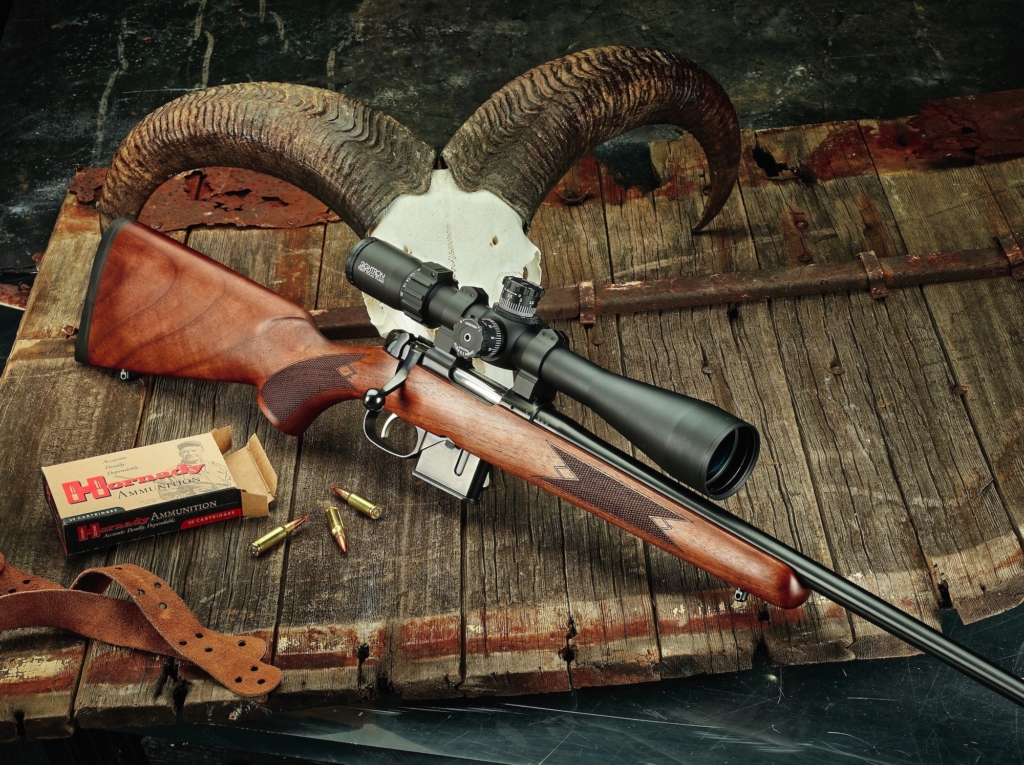 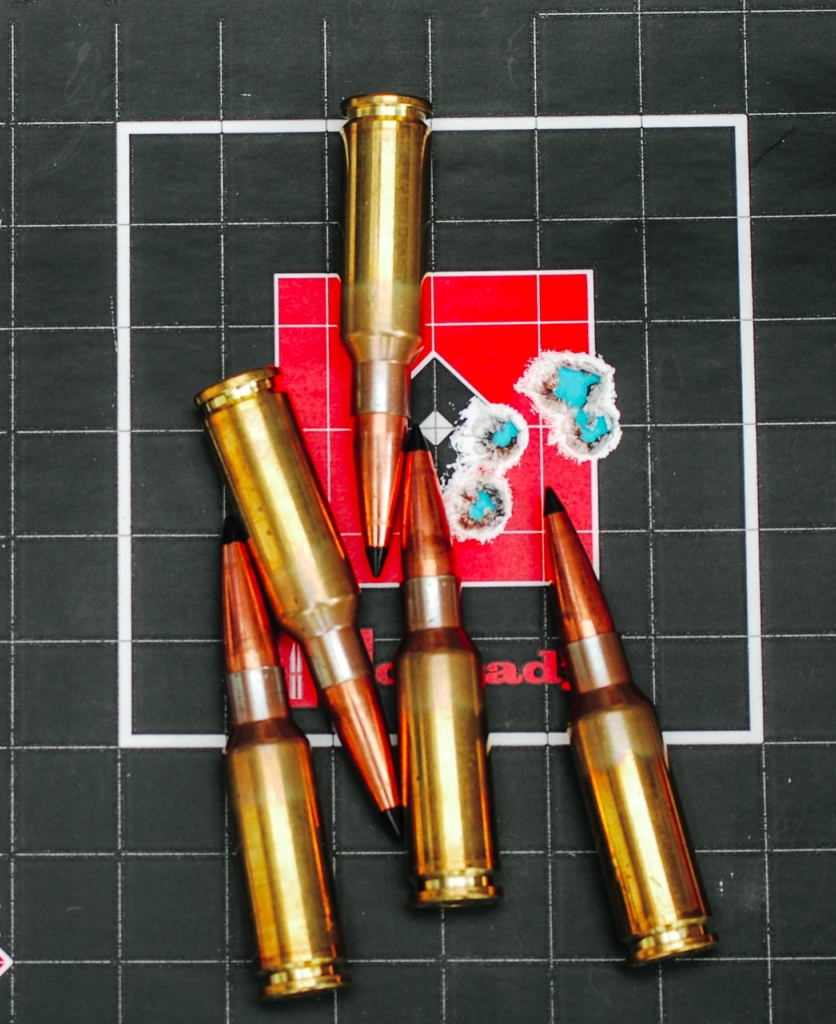 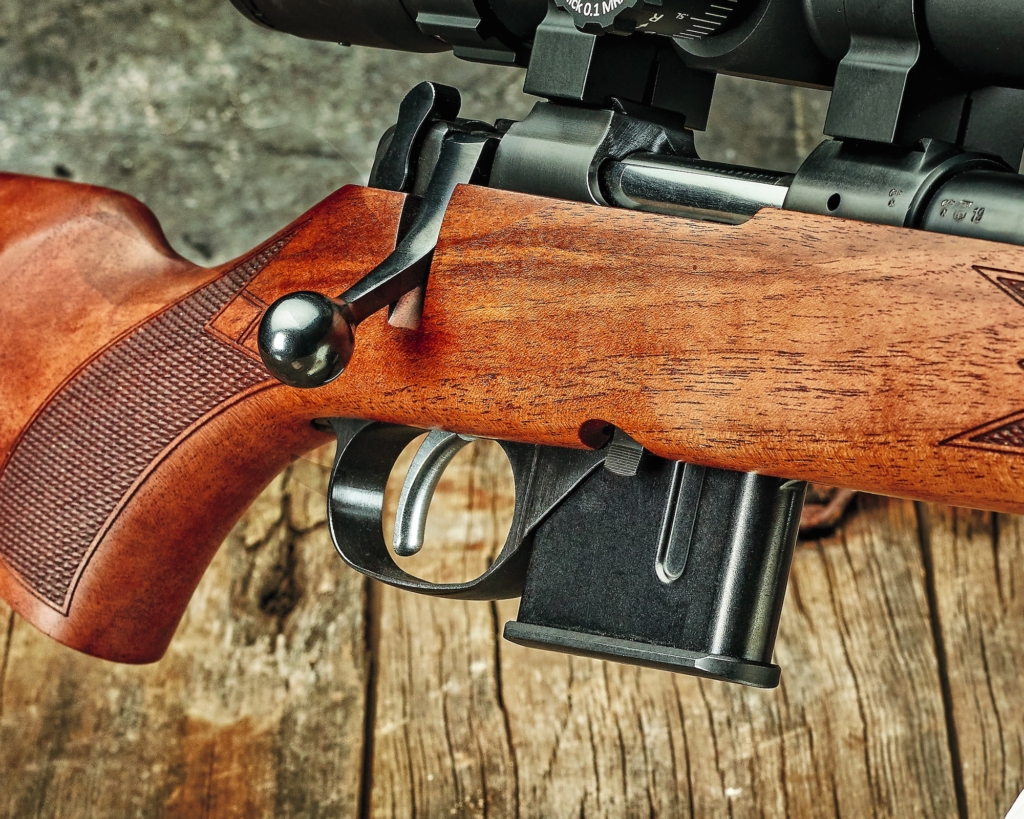 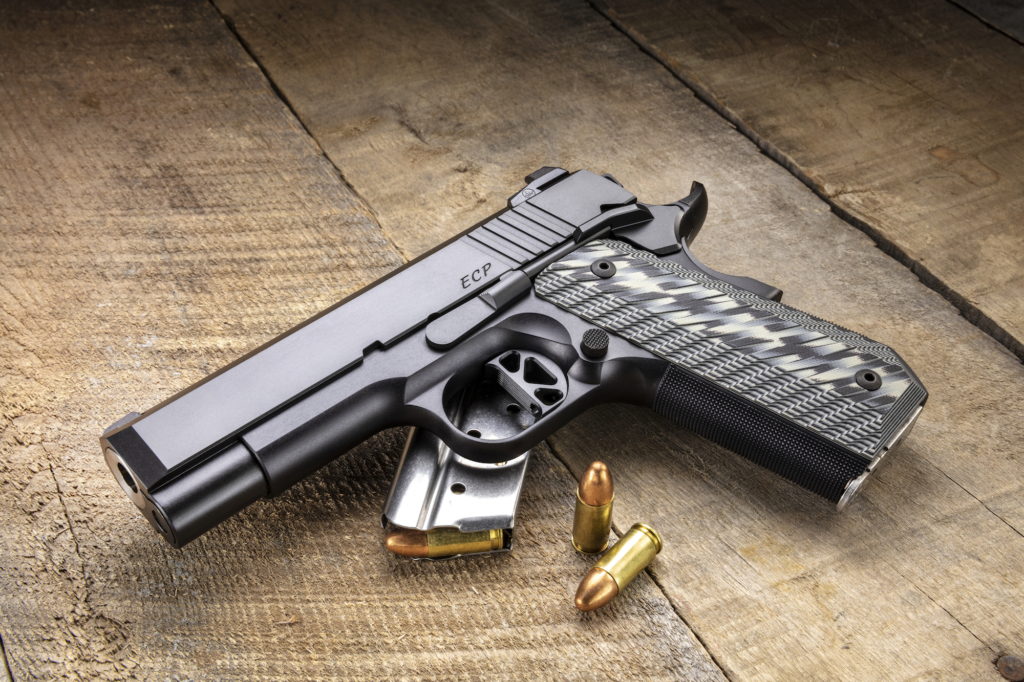