Česká zbrojovka has been known for plenty of firearms spread across different categories. Sports shooters enjoy the original concept of CZ 75. Armed forces, especially in former Czechoslovakia loved Vz. 58 rifles and Vz. 61 subguns. Hunters have been using famous CZ bolt action rifles like ZKK 600, CZ 527, or the more recent CZ 557 series. But what about CZ shotguns? Today we will have a look at a rather unknown semi-automatic shotgun – CZ 241.

The roots of the only original Czechoslovak semi-auto shotgun design that has seen a serial production can be traced back to the late interwar period. The development started in 1938, less than a year before the beginning of the Nazi occupation of Czechoslovakia in the ČZ Strakonice factory. The team led by Antonín Šlechta received this request along with a sample of the FN Browning shotgun which they examined thoroughly but in the end, their design was, as always with Czech guns, quite unique. 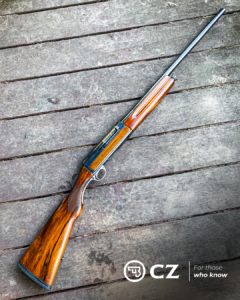 After the beginning of the German occupation of Czechoslovakia, the development continued until being put on hold in 1942 due to the order for all arms manufacturers to focus on military production. The shotgun was tested for durability and managed to withstand 80.000 rounds without any significant issue. 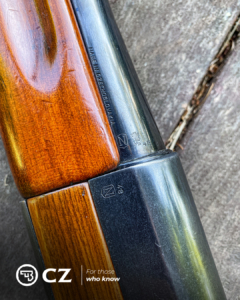 In 1945, when the war was finally over, Czechoslovak arms factories remained pretty much untouched and were able to refocus on civilian firearms. That was the moment for CZ 241 project to be resurrected and transferred to the CZ factory in Uherský Brod. 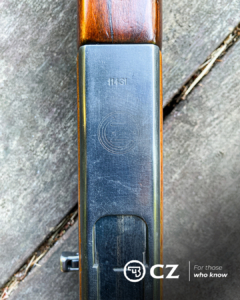 CZ designers simplified the construction of the shotgun and improved its reliability so that it could enter the serial production between 1946 and 1947. At the same time, the shotguns were re-named to model 816 which was the original CZ 241, model 812, and 820. The last two numbers indicated the caliber – 16, 12, and 20 gauge. 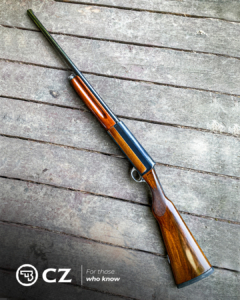 The production, unfortunately, ended very soon – in 1949 as the Cold war broke out and the firearms manufacturers needed to focus once again on the military production – in this case, the gun to blame was Vz. 48 submachine gun, also known as Sa 23/25.

Let’s now have a look at the shotgun from a technical perspective.

The idea was to build a very lightweight weapon which is a target that was certainly achieved – the original CZ 241 with its 2,9 Kg was one of the lightest semiauto shotguns available back in the day. The key to success, in this case, was the use of aluminum alloy for the trigger group and in some models also for the receiver itself. Fun fact # 1 – the material for these parts was obtained from melting down the wartime german plane’s propellers. Recycling at its best right there! 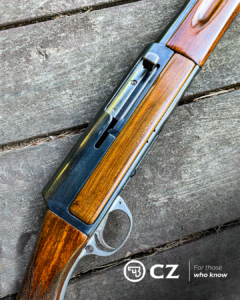 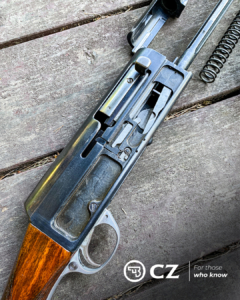 Functionally we are talking about a locked-breech long-recoil weapon with a very interesting breaking system. A brass ring with diagonal cuts put on a recoil spring guide rod traveled against a steel compressing ring every time the rifle recoiled. This solution managed to absorb a certain amount of recoil that could have also been regulated by the amount of lube on both parts. Friction was higher if there was no oil at all and a larger amount of lube then helped to smoothen the action thus reducing the function of the brake. 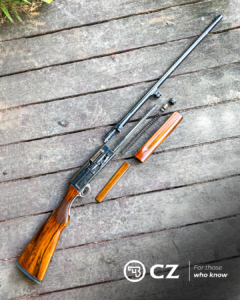 Three different barrel lengths – 550, 620, and 700mm are related to another fun fact – #2. The rumor has it that barrels were actually made from the castings originally prepared for German MG  131 machineguns. Thus the durability was guaranteed.

The shotgun was fed from a three-round magazine which may seem to be rather small. The idea was, however, to ensure no change in the balance of the weapon which was a problem in case of the larger capacity weapons with tubular magazines under the barrel. With every shot, these rifles tended to be slightly lighter on the muzzle end. Thus CZ 241 had only three round capacity – one round directly in the chamber and two more underneath the bolt. 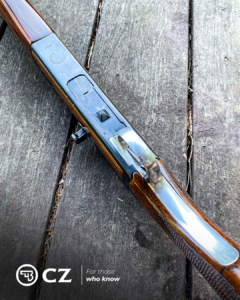 With over 15 thousand rifles produced between 1946 and 1949 this was, apparently a very successful design whose only disadvantage was a higher price. Despite that, it was pushed out of production only because of the industry’s forced re-orientation to military production. What a shame!