In one of the previous History Monday articles we talked about the CZ 75 Champion, the very first dedicated CZ handgun for combat shooting disciplines. As this handgun turned out to be more than successful, CZ management wisely decided to further develop the concept. Today we will have a look at a pair of handguns that may be considered „transition models“ between a standard CZ 75 and the current TS family of competition handguns – CZ 75 Standard IPSC and Modified IPSC. 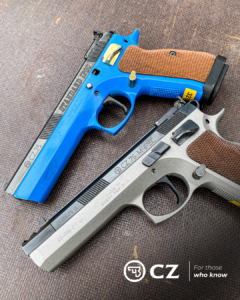 If we were to pick one issue of the original CZ 75 Champion and call it „the Achilles heel“ of the concept it would be the capacity. While 16 rounds of 9mm and 12 in the case of .40 S&W may not sound all that terrible, for IPSC purposes it was a true limitation that needed to be addressed. But how do you do that? With a magazine base pad extension, you say? Or via a longer magazine? Both solutions would certainly work in general but remember that the gun must fit the IPSC box. So, what now?

The only solution that remained here was a brand new magazine. CZ initially discussed its development with famous magazine supplier Mec Gar but in the end designed it in-house. The result was a wider magazine with a capacity of 16 rounds of .40 S&W. The very same type with 20 rounds of 9mm Luger was later used for the Tactical Sports model as well as for a current TS 2 series. 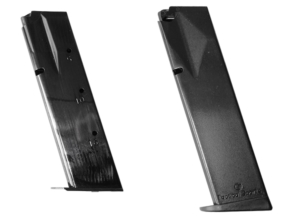 The capacity issue was resolved rather easily but you may object that the new magazine most probably did not fit the standard CZ 75 frame. And that is correct. Instead of modifying, the original frame CZ decided to develop a brand new one. Looking at it that may remind you of the CZ 97 frame which served as the literal springboard for IPSC models. 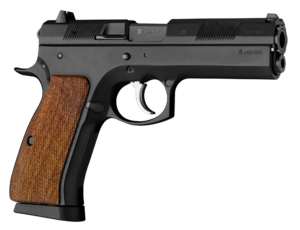 The new part not only provided more space in the pistol grip but also addressed a few more issues of the original concept. It was beefed up to improve durability as well as the lifespan of the handgun. Compared to CZ 75 Champion the Standard IPSC model was significantly heavier with 1,32 kilograms versus the original 1,15 kilograms. 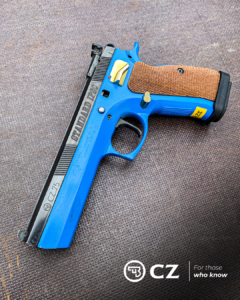 The additional weight also helped with recoil management and last but not least the longer slide rails allowed for more contact between the frame and the slide resulting in enhanced accuracy.

Internally it was still a good old CZ 75 trigger system with one significant change, however. To provide maximum space for the magazine, the trigger bar was reduced from the double-sided version to a more ordinary single-sided one sitting in the recess machined inside the frame. As it turned out, for SAO pistols it does not impact the trigger pull at all. The flat-face trigger was made either from a polymer or an aluminum alloy since the lighter trigger resets faster. 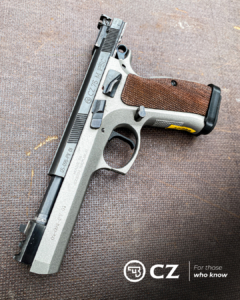 Both models featured fully adjustable LPA rear sights. Other than that CZ tried to keep the slide as similar to the original CZ 75 slide as possible in order to streamline the production. 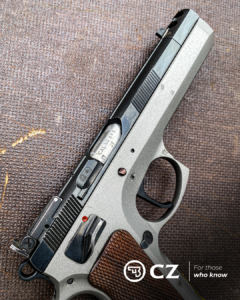 In total, only 1,977 pieces of both models were produced between 1999 and 2005. Just like its predecessor CZ 75 Modified IPSC and Standard IPSC proved to be very successful in various combat shooting disciplines and their further development resulted in the introduction of CZ 75 Tactical Sport. 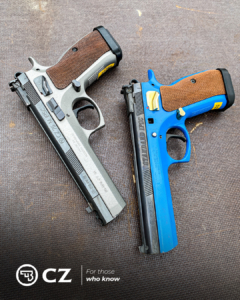