PDW is one of the newer concepts in the firearms industry. It has seen considerable growth in popularity since the early 1990s. However, did you know that the history of personal defense weapons is way deeper than that? And that it is closely related to the CZ? Let’s dive right into it! 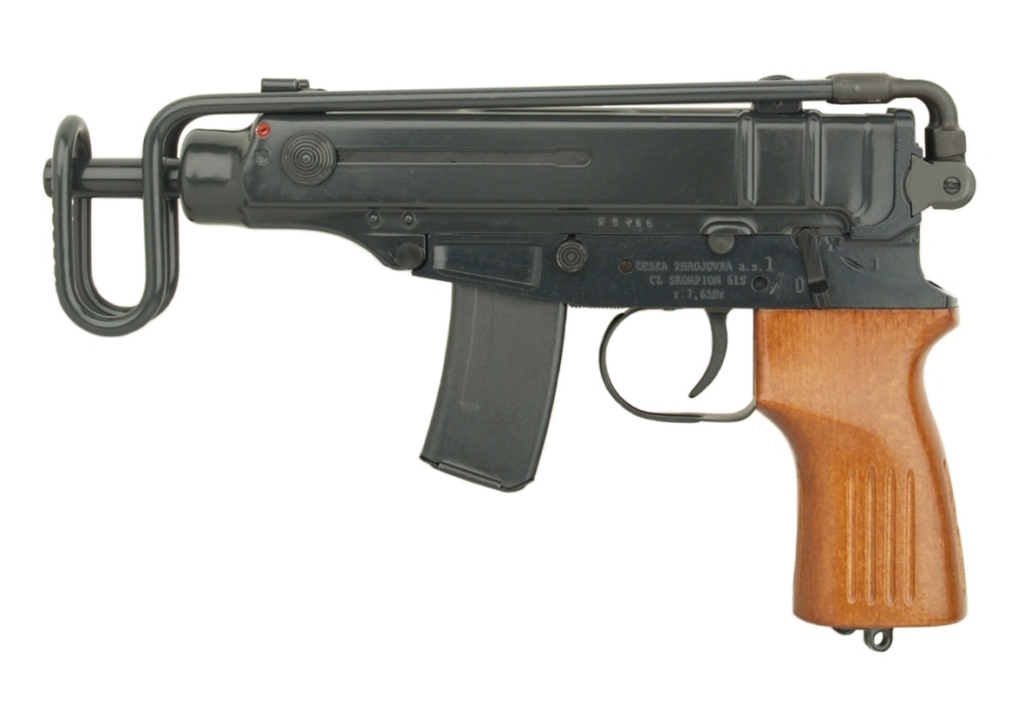 Back in the mid-1950s Czechoslovak Ministry of Interior requested a new firearm design providing then policemen with more firepower than the standard CZ 50 handgun. This information itself helps to disprove two common myths related to Vz. 61 Škorpion. The first one would be that Vz. 61 is a military weapon. Not really as the requirement was placed by the Ministry of Interior and not by the Ministry of Defence. However, the army was soon taken on board as a consultant and helped to further specify how the gun should look like. 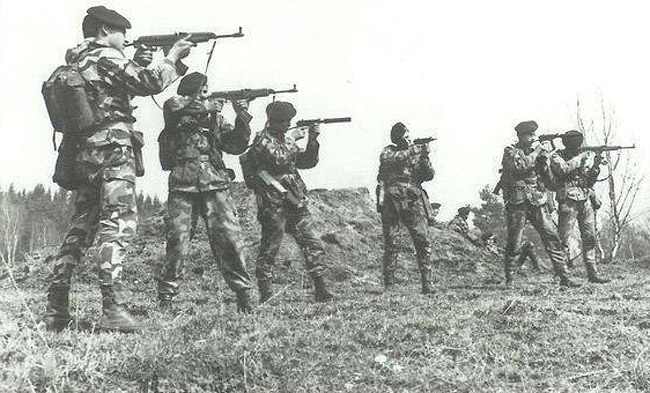 The second myth is related to the original chambering of the submachine gun. 7,65 mm Browning (a.k.a. .32 ACP) is certainly not the most ideal cartridge in terms of energy for a gun like this, but since the Czechoslovak police were using handguns in this caliber since the late 1920s it was a rational choice for them indeed.

Once the requirements were finalized the task to design a prototype was given to the state-controlled research and development institute in the city of Brno. The management of the bureau wisely decided to entrust this project to a young engineer Miroslav Rybář.

The requirements were pretty strict, the weight was not supposed to pass 1,2 kilograms with only 250 mm of length with a folded stock. Combined with a requested effective range of 100m using the rather anemic cartridge that also caused problems with its semi-rimmed case it was a tough job, to say the least.

As there was no other dedicated subcompact submachinegun in existence at that time it was up to Mr. Rybář to design the prototype from the ground up. 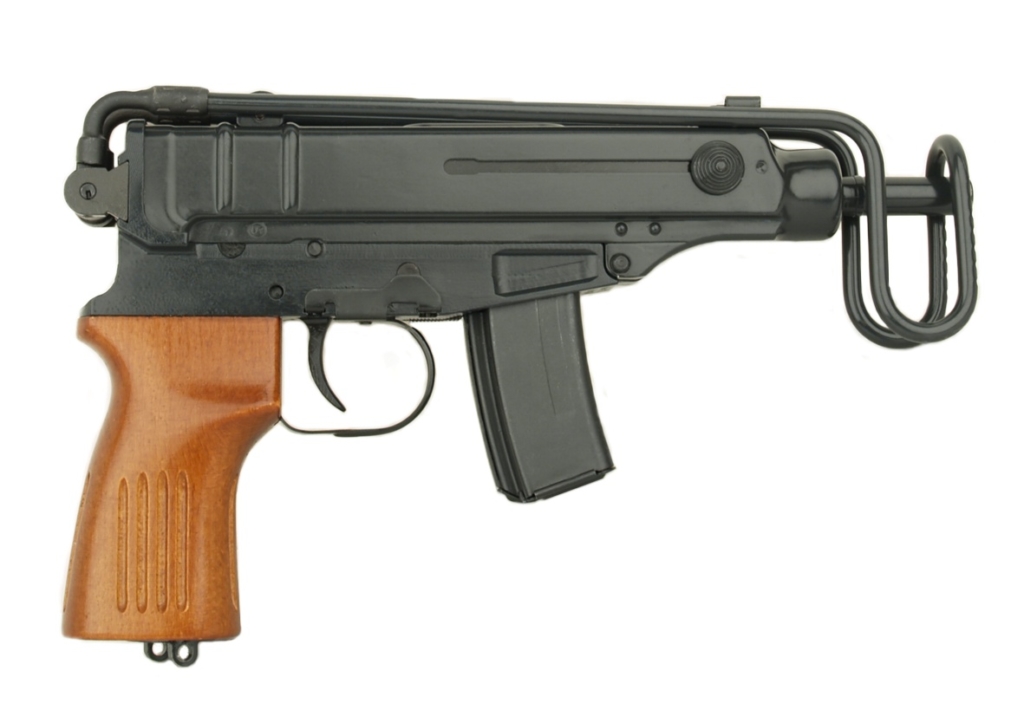 His thorough approach merged with the experience he had at his disposal in his colleagues, namely Otakar Galaš, and Jiří Čermák leading to a final prototype called Š-59. Interestingly, Miroslav Rybář also used the project as a base for analysis, that was a core of his final dissertation at the Military Technical Academy in Brno.

The prototype passed all mandatory tests with flying colors and just very little was changed before it was introduced in the service of the Czechoslovak M&LE forces in 1961. Miroslav Rybář did not abandon the project, however. He designed a Vz. 64 and Vz. 65 prototypes chambered in 9 mm Browning (.380 ACP) and 9 mm Makarov in the mid-1960s. Before his premature death in 1970 Rybář managed to finish the last and most advanced design of the whole Škorpion family – Vz. 68 chambered in 9 mm Luger.

Let’s have a look at the gun itself a bit more closely.

This closed-bolt automatic weapon weighs only 1,3 kilograms without the magazine. The upper assembly is made from stamped sheet metal. The ejection port is located on the top and if you ever manage to shoot this gun in fully automatic mode, make sure you do not forget a cap or something to cover your head. The raining brass can be a bit annoying! 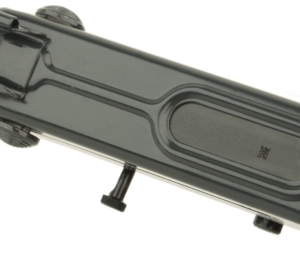 Inside you will find a 115 mm long barrel and a rather small bolt of a telescoping style which is a signature of the Czechoslovak firearms design of the 1950s. It is fixed inside the upper by a pair of charging knobs that are used to cock the weapon and pinch your thumb if you are not careful when shooting it. Two recoil springs are placed on top of the bolt and are not very stiff. That, combined with a compact bolt and his rather short travel means that this simple blowback submachine gun would cycle very fast. For that purpose, it features an ingenious rate reducer placed inside the pistol grip. This is, after all, why it is placed square to the receiver. The device helps to lower the rate of fire from 1200+ rounds per minute to a more rational 850. 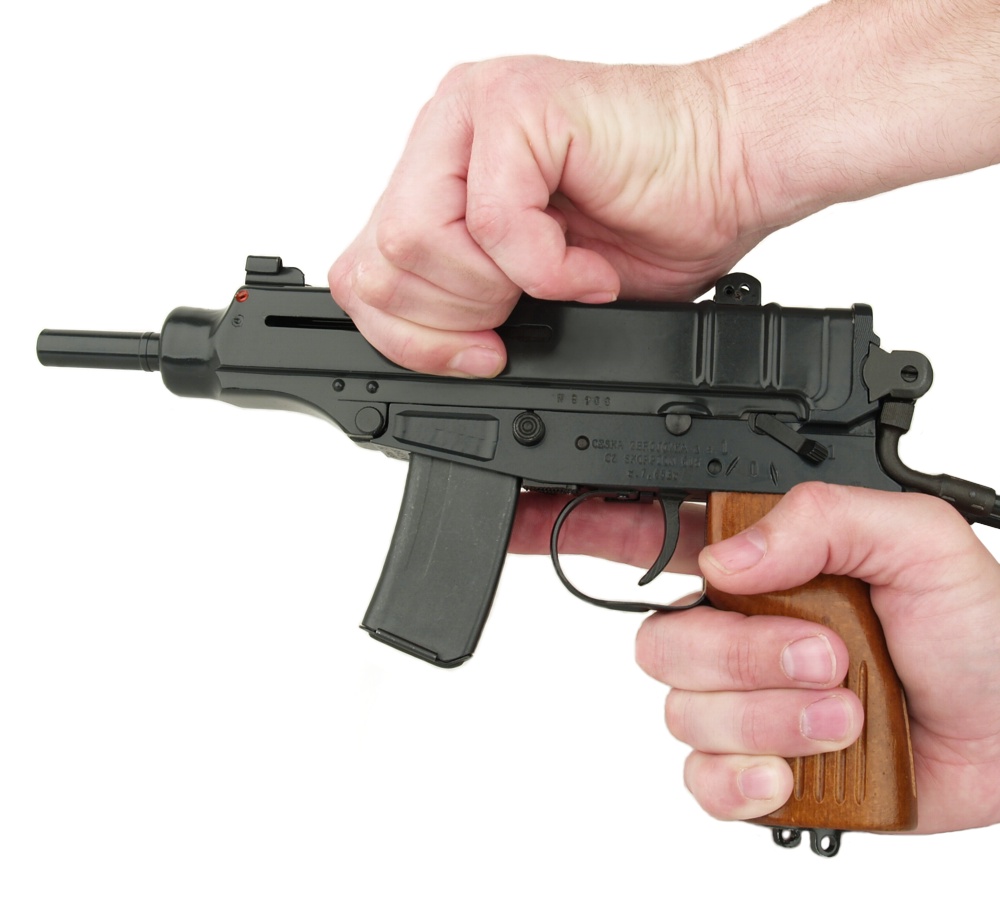 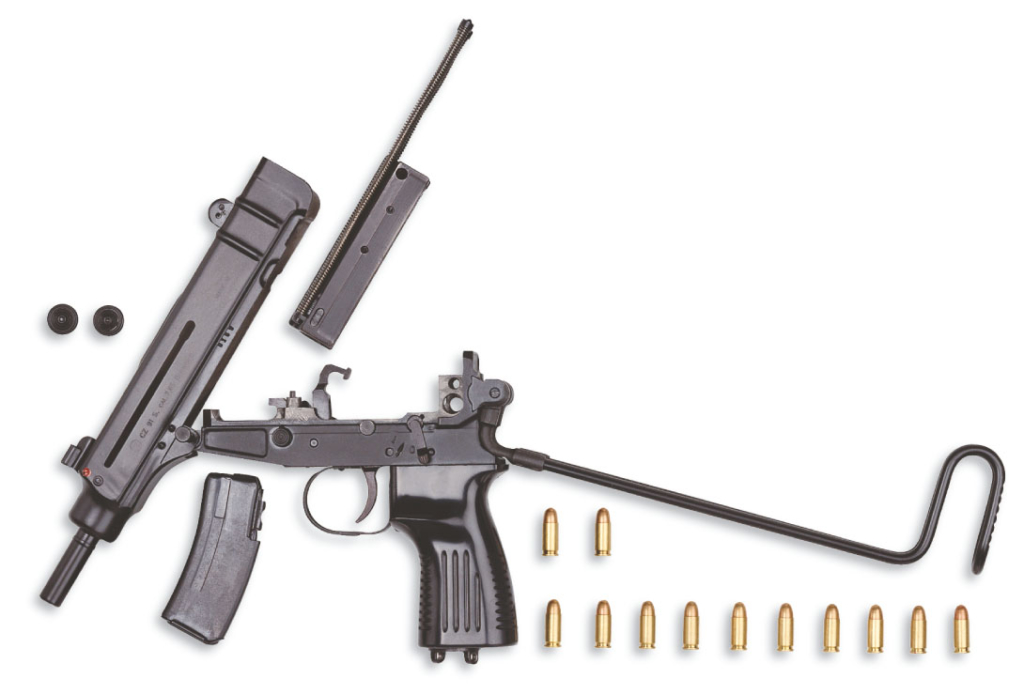 The lower receiver is a machined piece of steel and houses a rather complex trigger group. The safety switch on the left side is rather stiff and allows you to choose from the safe, semi, and fully automatic regimes. In front of the very spacious trigger guard you will find a magazine well with a magazine release button. The capacity is 10 or 20 rounds. The smaller magazine is meant to be used when the gun is carried in a leather holster but we all know that 20-rounders are way cooler. 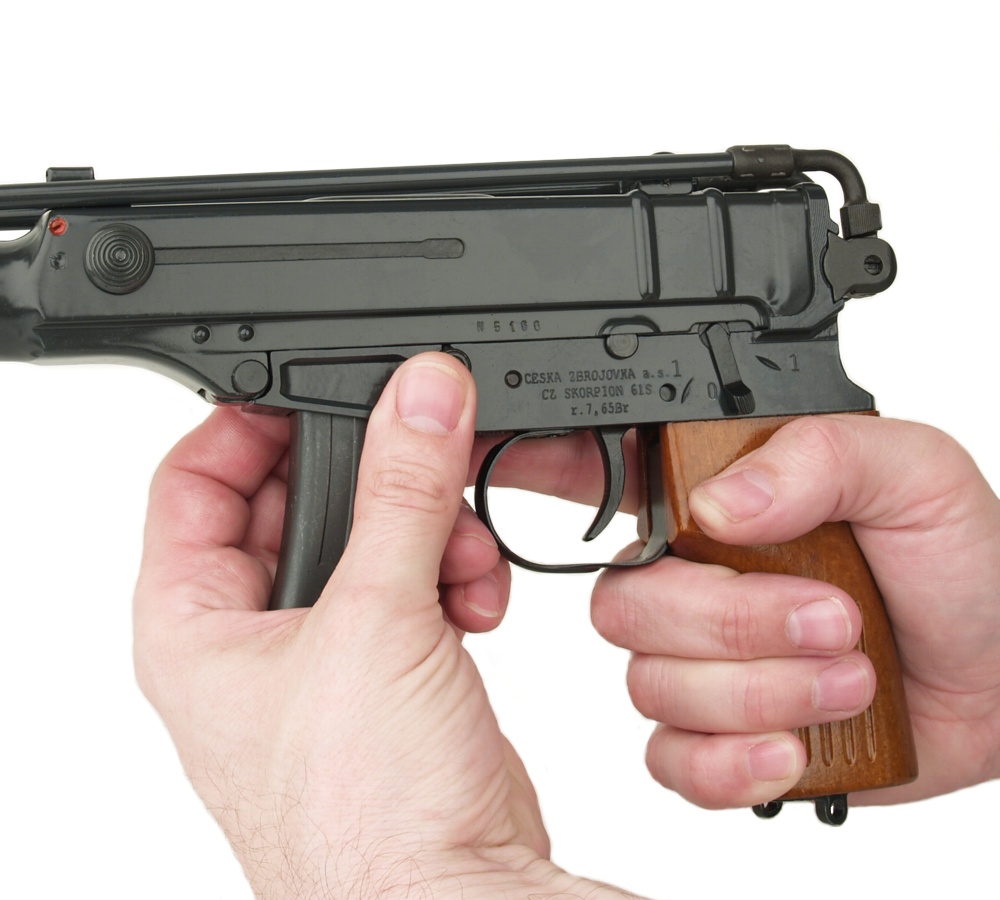 Above the magazine, you will find a captive pin that holds the upper and lower together. 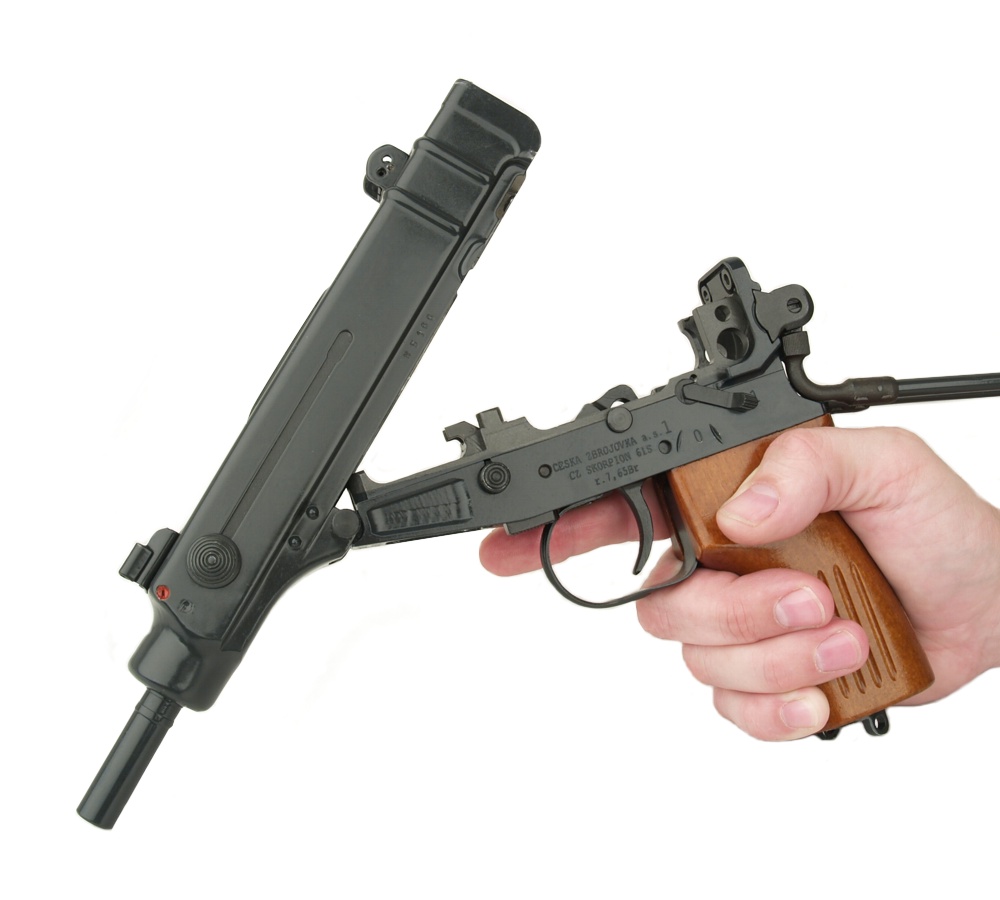 The sights are placed on top of the upper receiver and are fully adjustable with rear sight plates allowing you to pick from two distances – 75 and 150 meters. 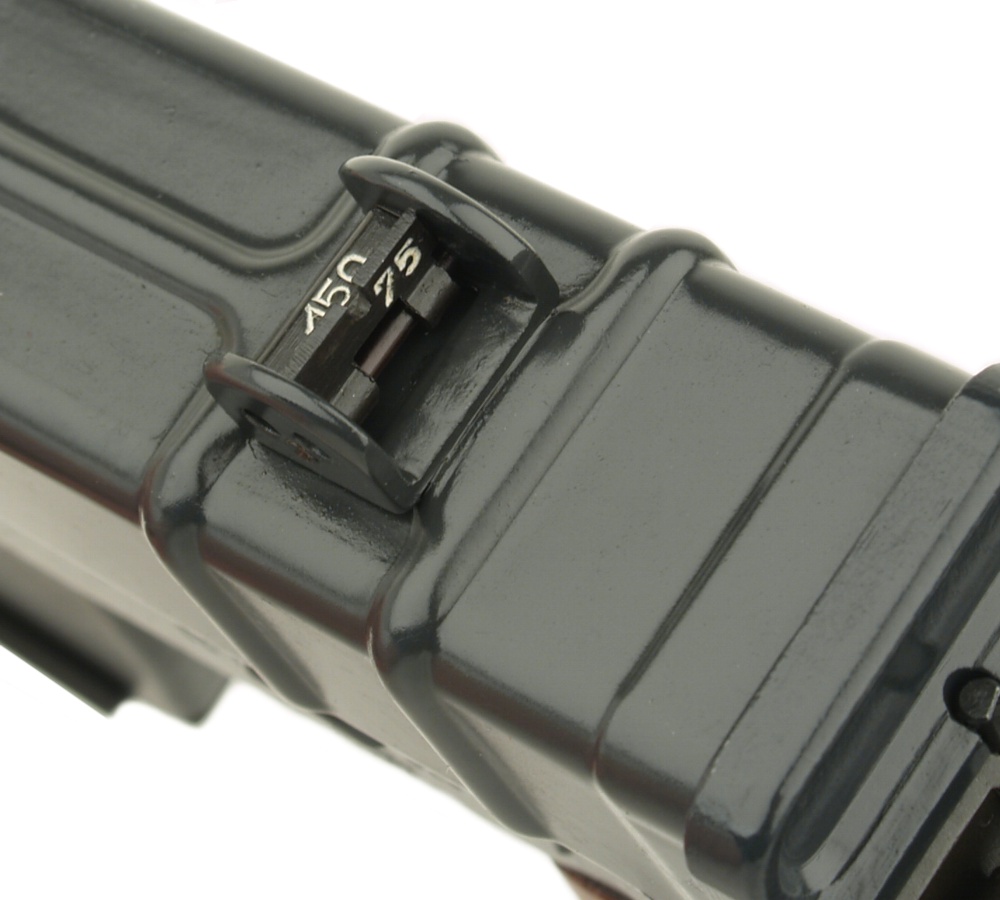 Last but not least we need to mention the typical folding stock which is shaped like – you already know – a tail of a scorpion. It is quite short and does not provide much comfort but it is there and you would be surprised how much more accurate you will be with the stock unfolded. That said even the „pistol style“ shots are very easy and accurate. 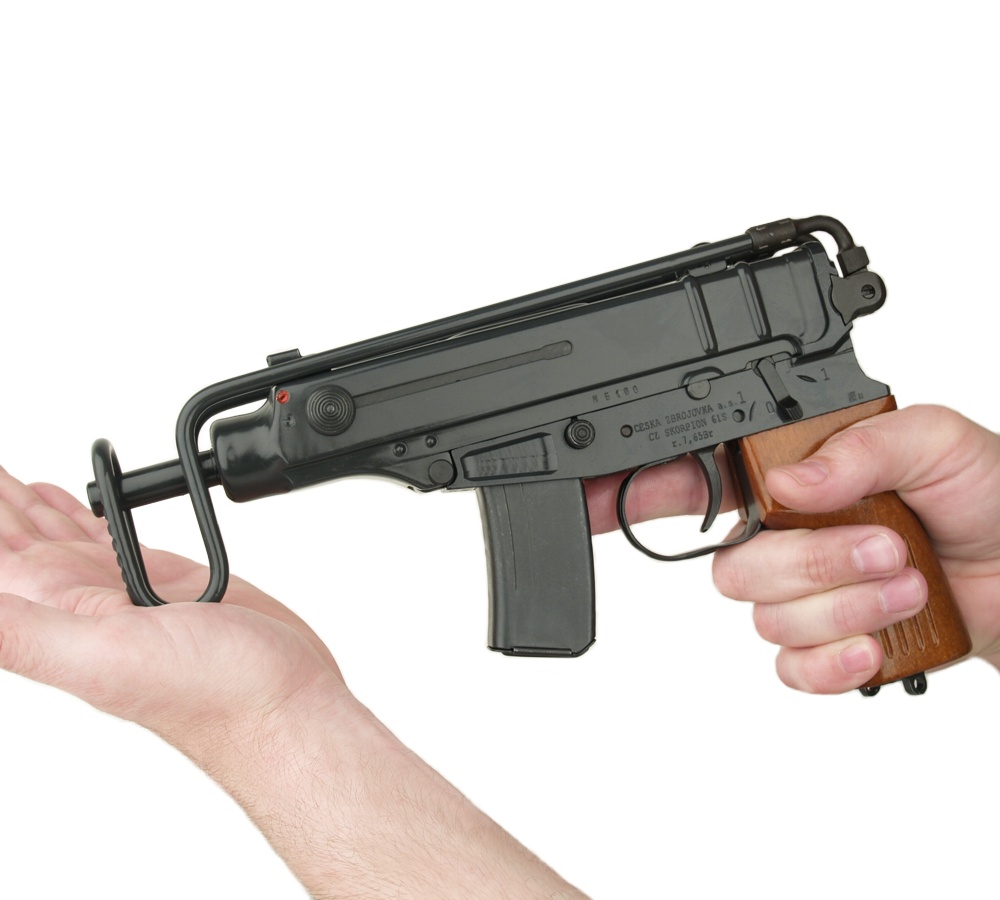 Along with the gun itself, a suppressor was developed for special operations purposes. It is mounted on the barrel via a collet system and gives the gun an even more „tough guy“ look. 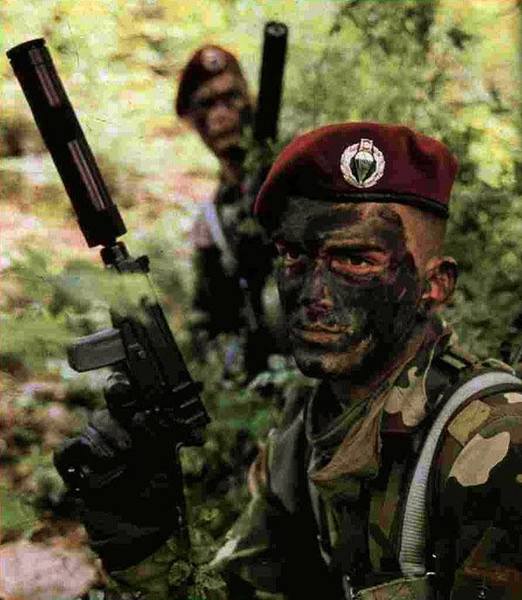 And a fun fact for the end. The commission that was supposed to decide whether this gun was fit to serve in the Czechoslovak armed forces was not very convinced that a submachine gun can be compact enough to be fully concealed. This ceased to be a problem after Otakar Galaš, a member of the design team, smuggled the Vz. 61 under his jacket to the meeting room and unexpectedly placed it on the table in front of the surprised officials. How cool is that?

Just like many other firearms designed in former Czechoslovakia, Sa 61 Škorpion became an icon and a pioneer in its category and without a doubt paved the way for modern PDWs.