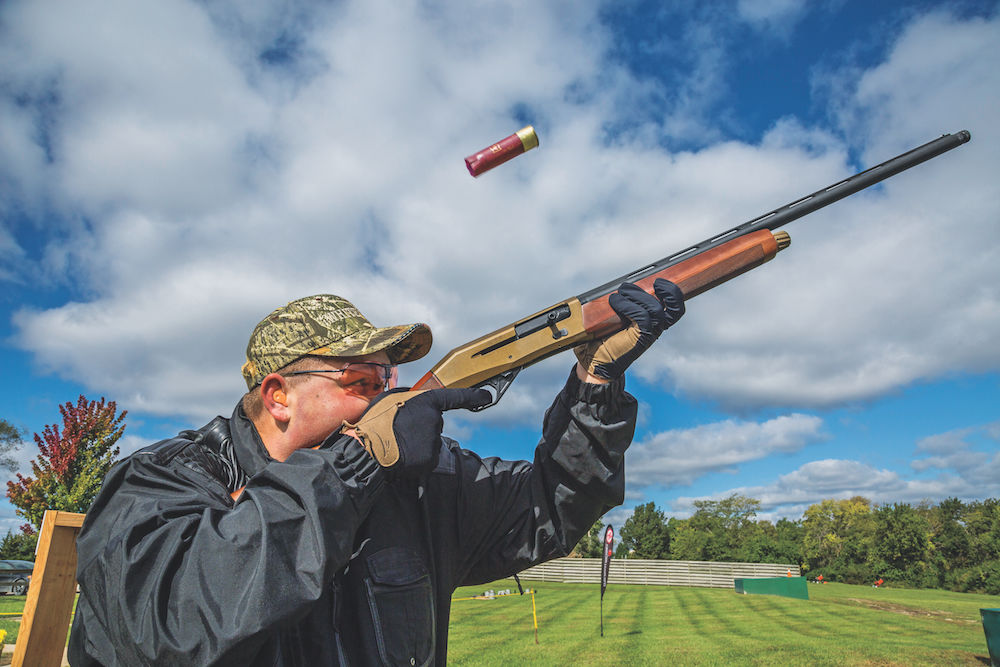 Challenge: Break the most clay targets in a 12-hour period by a ve-person team.

Fighting cold temperatures and a stiff tailwind, each shooter kept their two MEC launchers humming. According to the plan, there would be 30 minutes of aggressive shooting followed by a 10-minute break. Over the 12 hours of shooting, the shooters averaged one shot every second.

CZ-USA’S shotgun product manager David Miller and four teenage teammates pulverized the Guinness World Record on October 12, 2019, by busting 14,167 clays over 12 hours, obliterating the previous record of 4,602 clays hit by a five-person team. Although the feat was spectacular, equally important were the four teenagers Miller recruited to join him on this record-breaking adventure.

The event highlighted the importance of supporting young shooters. Without an in ux of young blood into the shooting sports, the sport will wither, and our society will be worse off in many ways. That’s why instead of choosing ve pro shooters, Miller, who holds the Guinness World Record for breaking 3,653 clays in one hour, choose to recruit four junior shooters from two of the shooting programs CZ-USA supports — the Scholastic Clay Target Program (SCTP) and the Academic Integrity Marksmanship (AIM) program.

“I wanted to make this record-breaking event special,” said Miller. “With pro shooters, everyone would expect us to nail the record, but it wouldn’t touch your heart like this one does.”

The youth shooters were Levi Henrichs, age 19, from Sibley, Iowa; Makayla Scott, age 16, from White Sulphur Springs, West Virginia; Jessica Strasser, age 17, from Waterford, Wisconsin; and Weston Zolck, age 19, from Herman, Nebraska. The four teammates qualified at SCTP or AIM Nationals and were chosen not only for their shooting prowess but also for an essay they wrote on why they belonged on the CZ-USA team. According to Miller, it’s not enough to be skilled; a shooter must have a passion and be a good person, too.

The challenge came with a list of criteria the shooters had to face. One was that only the shooter could touch their guns once the shooting started. That meant loading an average of 4,085 shotshells. 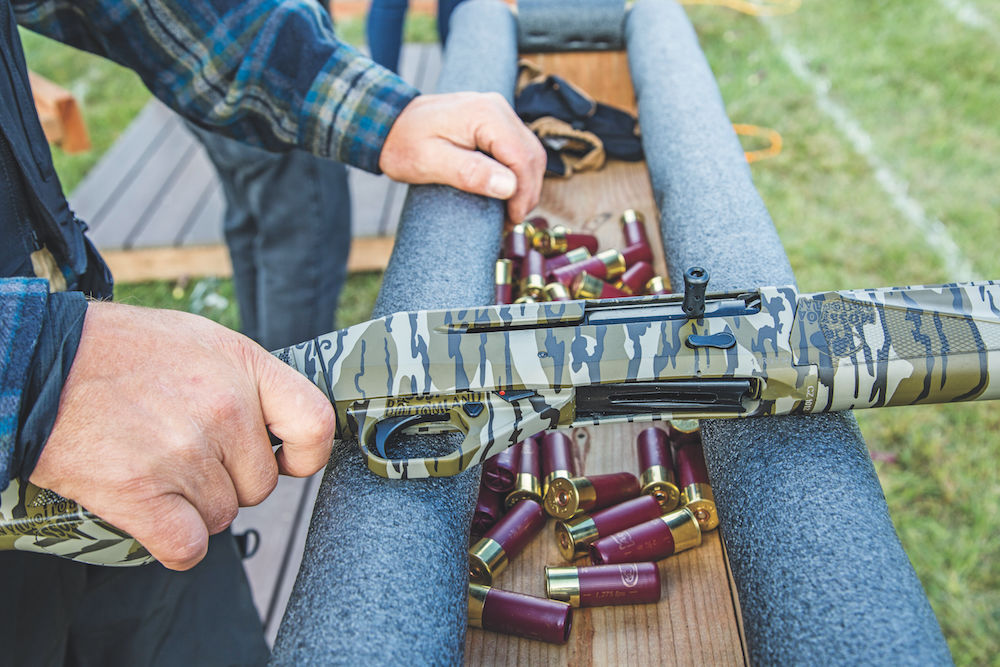 Youth shooting team sports are unlike other team sports. There are no benchwarmers here. When you join a team, you participate regardless if you are a phenomenal shooter or new to the sport. Also, male and female shooters compete together. Organizations like the SCTP help make teams and competitions possible throughout the country by providing support in the form of equipment, fundraising, and volunteer coaches.

The SCTP is an industry-supported youth development program whose core mission is to get youth involved in the team sport of clay shooting. This includes trap, skeet, and sporting clays. The SCTP was started in 2001 by the National Shooting Sports Foundation (NSSF) to support youth trap teams. By 2008, it was passed to the Scholastic Shooting Sports Foundation (SSSF). SCTP has over 3,500 volunteer coaches and roughly 20,000 athletes in the program. They seed starter teams with equipment like eye protection, hearing protection, range bags, hats and shotguns.

“The focus isn’t on winning. The focus is on making good kids,” said Thomas Wondrash, national director for the organization. “We’re helping build good morals, values, and teaching them the right things. When you do that, the rest will come. If it starts out right, it ends upright.

as adults. They learn to communicate, work well with others, and develop good sportsmanship,” Wondrash continued.

A huge bene t young shooters get by joining the SCTP is that the organization is a feeder program for getting into the Olympics. SCTP forms a team from the best shooters in the nation and competes in international skeet, bunker, and Olympic trap. 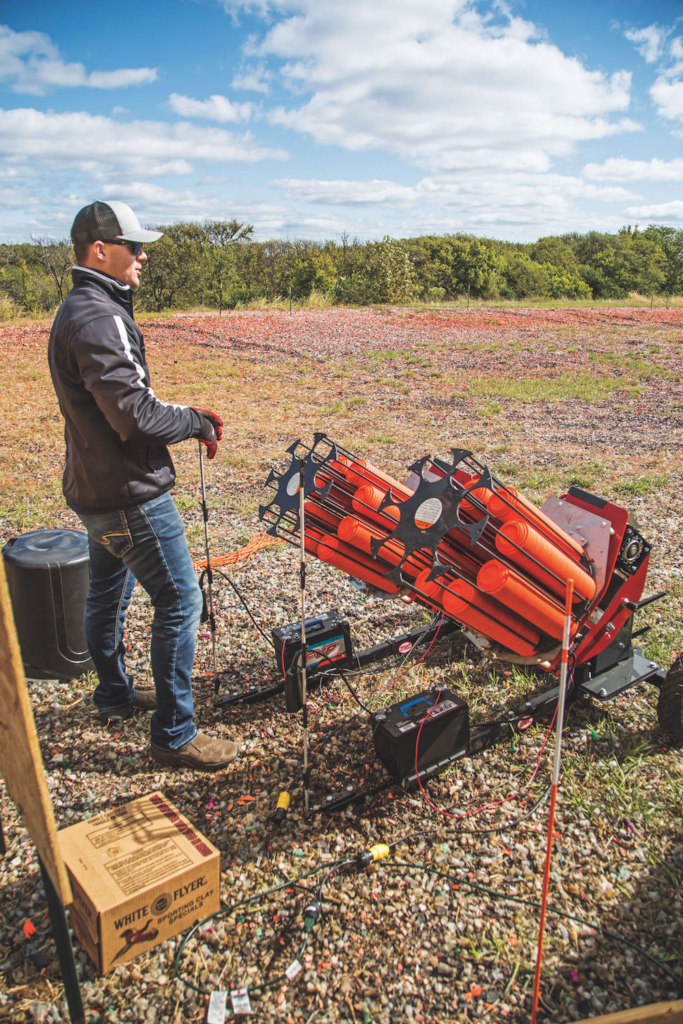 Anticipating the amount of crud and gunk a shotgun would be facing, CZ prepositioned five 1012 shotguns at each shooting station. Only one shooter used three shotguns, while the majority used two. Weston Zolck used one. 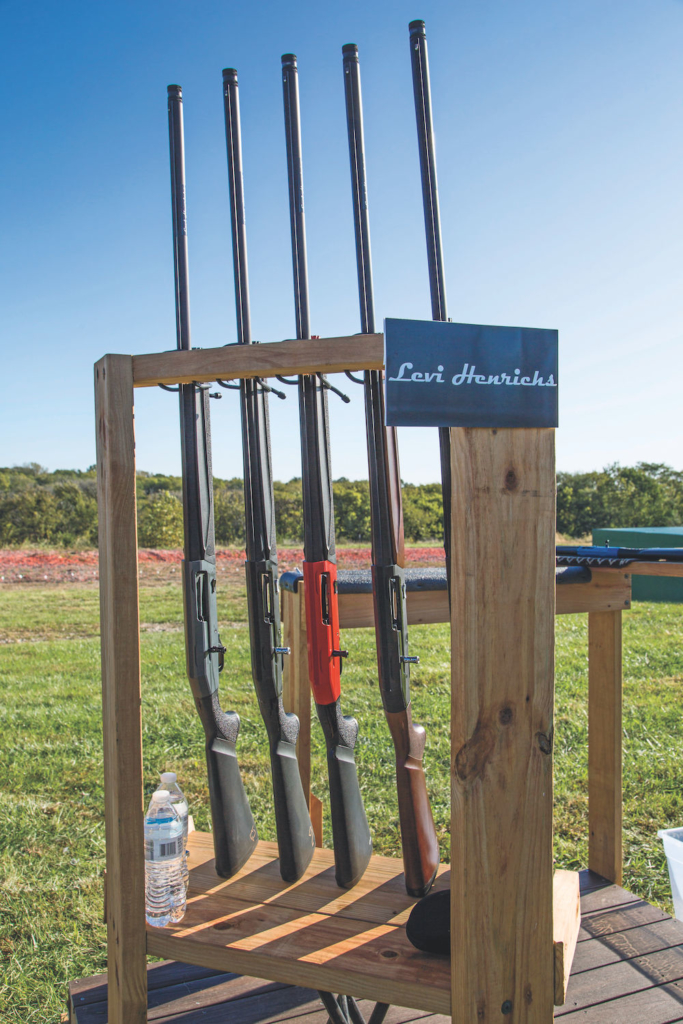 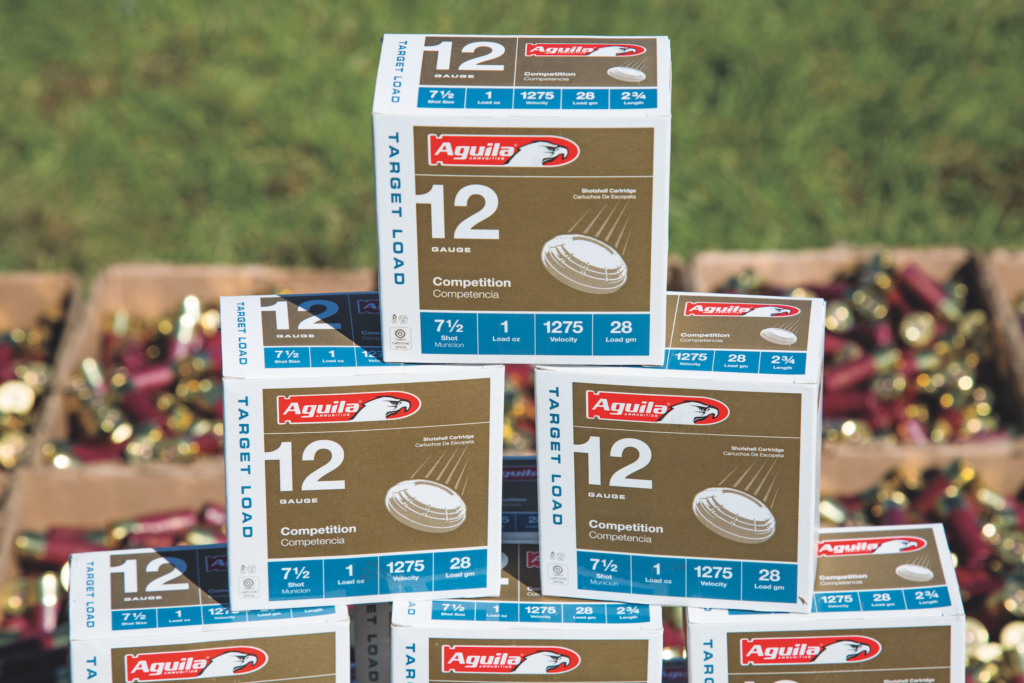 CZ-USA understands the profound implications of supporting the youth shooting sports. They not only support organizations like the SCTP but also offer shotguns that will accommodate young shooters.

Fit is a tremendous issue among young shooters since many manufacturers produce only adult-sized shotguns. CZ-USA offers a variety of shotguns like the CZ All-American Trap and CZ SCTP, which are designed to comfortably get more people behind a shotgun. The All-American Trap has an adjustable length of pull, cast, and toe, as well as a four-way comb and adjustable comb height.

The “good kids” trait was clearly evident in the young teammates. All showed a humbleness, gratefulness, respectfulness and passion to demolish the world record.

During the grueling 12-hour task, they worked like a well-oiled machine, smoothly transitioning from one shooter to the next. From daylight to night, they kept up a demanding pace, ignoring the sore thumbs, sore cheeks, and fatiguing bodies.

The new CZ 1012 shotguns also made the task easy for them, as the guns ran flawlessly throughout the shoot. The only issues were what one would expect from shooting hundreds of shells. They would become gunked up and become sluggish. Zolck anticipated this and brought a gun cleaner/lubricant, which allowed him to use the same 1012 shotgun throughout the whole shoot.

Culled from a large eld of shooters who have enjoyed the bene ts of SCTP, team CZ-USA slayed the world record. The significance of this was not lost on the young team members whose names are now part of Guinness World Record history.

They are all exceptional, and their lives were changed because of the shooting sports. Their faces will appear in newsletters, magazines, blogs, newspapers and social media. Somewhere there is a young person looking at them and saying, “I can do that. I want to be a part of that.”

Thanks to SCTP and other organizations like it, it’s easy to be part of the shooting sports. • 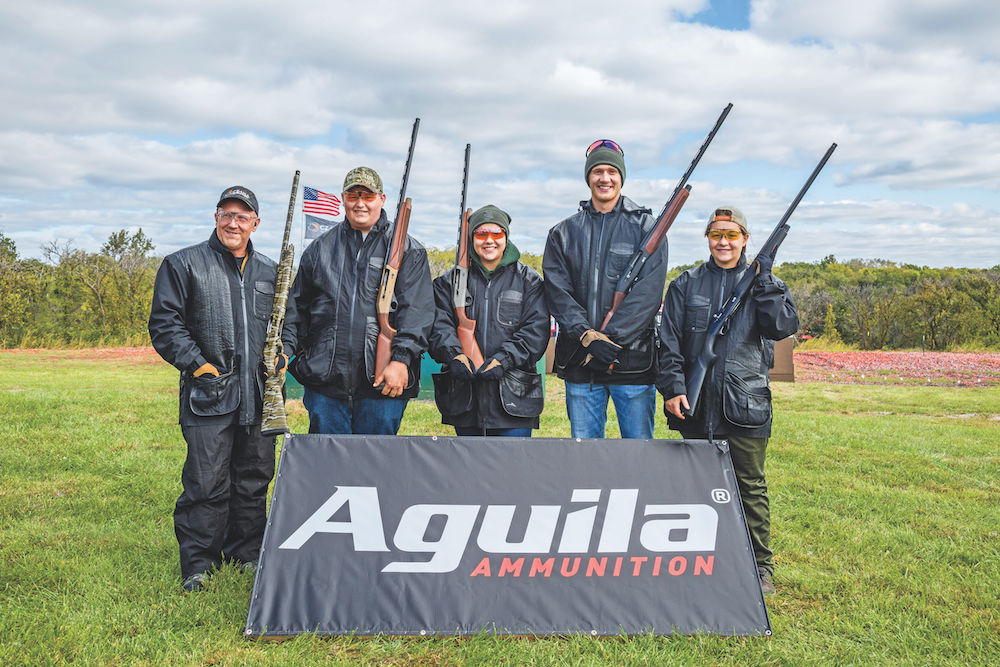 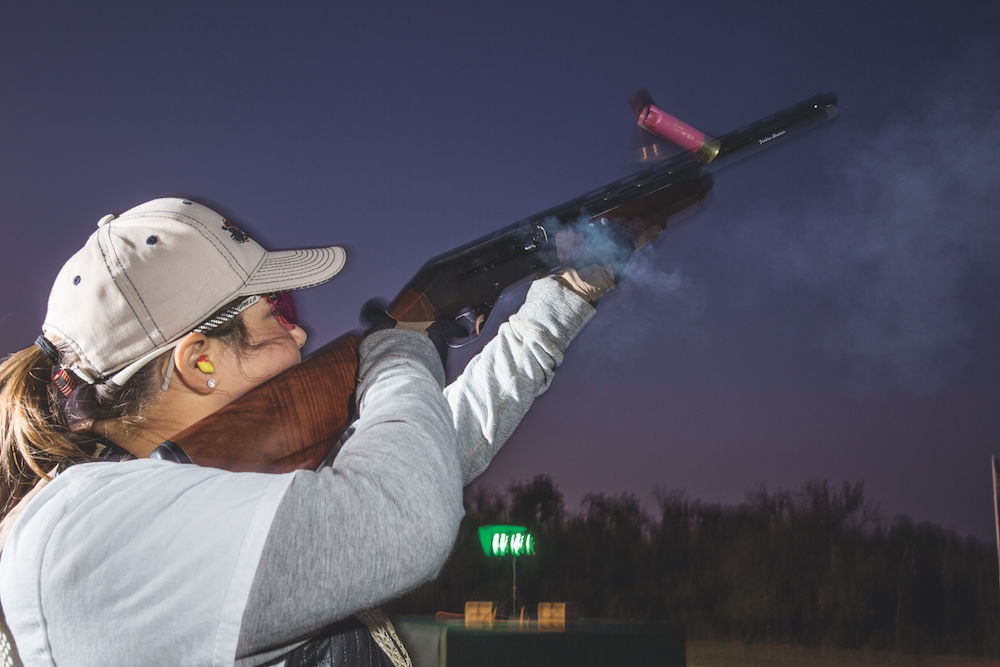